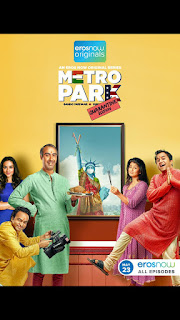 Fans can now rejoice as their wish to reunite with the uber cool clan of Metro Park comes true starting Saturday, 23rd May 2020 on ErosNow.com!

After gaining much applause and adulations for its first season in 2019, the premium OTT platform Eros Now, has proudly announced the release of a very special Quarantine edition of its original series titled ‘Metro Park’. Five episodes of 3 to 5 minutes each, promises to take fans on an exciting joyride as it showcases a fascinating story that revolves around the members of a Gujarati family settled in New Jersey, USA.
Over the years, Indian culture has made its presence felt globally. Regardless of which part of the world we are in, our deep-rooted values have given birth to many Indian neighbourhoods. The distinctive and individual characteristics of Indians settled abroad not only capture everyone’s attention but often our desi community is seen as a catalyst for some quirkiness. Art imitates life, and that comes across in this captivating series starring Ranvir Shorey, Purbi Joshi, Omi Vaidya, Vega Tamotia and Pitobash Tripathy amongst others. The first season received several accolades and popularised the concept of e-pooja in many places, setting an all-new trend.
A perfect blend of drama and comedy, ‘Metro Park – Quarantine’ Edition is here to leave us all entertained. This time around, the residents of Metro Park can be seen in quarantine mode, however COVID fails to curb the spirit of its cheerful & chirpy residents even in such challenging times. In this quarantine special edition one can witness, how despite staying indoors, Kalpesh and gang adapt to the new ways of living which has become the new normal and stay cautious, creative, and maybe even a little calm.
This quarantine edition has had actors shoot their portions independently at their residence. Right from Payal taking online dance sessions to Kalpesh trying his hands at cooking – there is a lot that in the series that will keep you glued to the screen.
Speaking up about the show, Ridhima Lulla, Chief Content Officer, Eros Group says, "The amount of love Metro Park's first season garnered last year, it got all of us at Eros Now really excited to put together a special Quarantine Edition of the show. We are aiming to deliver exciting and unique content for our viewers world over, which they can binge watch and enjoy during the lockdown. With the characters and milieu both being relatable to the current circumstances worldwide, we are confident this special edition will be showered with tons of love by the audiences.
Ecstatic to be a part of Metro Park - Quarantine Edition, Ranvir Shorey said, “It is always a joy to work with Eros, and even more so to work on Metro Park. It is very special to me, as it was the first series that I shot for a digital platform. Shooting for Metro Park - Quarantine Edition has been truly exciting and nerve-wracking at the same time because it is entirely shot from home by the cast, which is turning into the new normal in the times of Covid - 19. I’m hopeful that Metro Park fans will enjoy watching these specials especially made for them.
Omi Vaidya also spoke about working on this special edition of the series and added, “People are struggling in lockdown and the stories we see on tv/online suddenly seem so irrelevant and don't speak to the challenges people are facing right now. Because of Metro Park season one's success and the immense appreciation it received from audiences, we made it a point to create a special Metro Park - Quarantine Edition to give people some relief and a comedic mirror of their own lives. We are just so lucky we have such a dynamic partner like Eros Now to bring out such interesting content. It's been a wonderful experience collaborating with them as they take chances and push the envelope of quality storytelling.
Written by Ajayan Venugopalan and directed by Abi Varghese & Ajayan Venugopalan, Metro Park - Quarantine Edition will be premiering on ErosNow.com Saturday, May 23rd onwards.