HAUSLA - A Song For The Cause to motivate the Cancer Patients 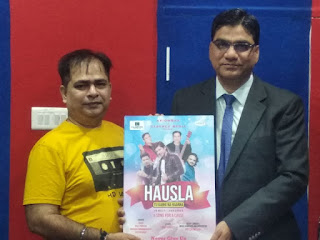 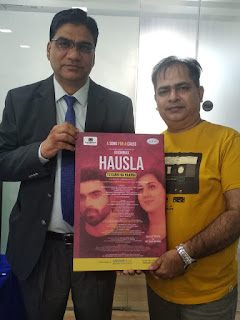 The song HAUSLA is being released by AXIOMMAX and Cadence Media to motivate and inspire not only the cancer patients but also their families and caregivers to go through the long journey of treatment. It took almost 2 years to complete the project HAUSLA. The Music is melodious, the Lyrics are touchy and the Mission is great.
This is the only motivational song created for cancer patients and their families and caregivers, which has been dubbed in 12 languages including 11 Indian languages and one international language.
Out of these 7 songs have been sung by legendary singer Shaan (Hindi, Bengali, Marathi, Punjabi, Assamese, Oriya & English) while 2 each by Vijay Prakash (Tamil and Kannada), and Sreekant Krishnamurthy (Malayalam and Telegu) and 1 by Parthiv Gohil (Gujarati).
This melodious composition created by Hitesh Mishra awaited 6 months to get the right lyrics which were ultimately given by Ravi Basnet. The initial response was so motivating that it was decided to go for all languages. So, it involved 11 more translators and language supervisors.
HAUSLA is an untiring effort of dedication, commitment, perseverance of a team of over 100 people with adherence to top quality and never say die attitude.
The song HAUSLA comes in two versions the first one is video for Patients while the other one is audio for Caregivers.
The Caregiver’s Perspective:
HAUSLA is the only motivational song which is not only taking care of patients but also their caregivers whose contributions and sufferings are not noticed many times.
In the long journey of cancer treatment the principal caretaker suffers the most emotionally, financially, socially and physically.
When everyone takes good care of patient, the principal caretaker remains under heavy stress, fear, depression, hopelessness and helplessness anticipating a gloomy future.
There is always a fear of losing the loved one, who was perfectly alright moments before diagnosis.
He/she is also worried about how to manage the children, their education, upbringing, marriage and career if any unforeseen thing happens.
He/she is also stressed about how to manage the finances as all their savings have already gone into the treatment.
Socially, the principal caretaker suffers as everyone expresses sympathy for the patient, while no one cares for him/her who is fearing to lose virtually everything.
His/her physical health deteriorates & he/she breaks down emotionally.
HAUSLA is a small step towards helping the caregivers in such low moments of their life which will certainly pass through and they will come out as ‘WINNERS’.

The Patient’s Perspective:
The moment a patient confronts the word cancer after the diagnosis, he/she passes through a series of emotions starting from denial (not me), anger (why me), guilt (this is the result of my wrong doings), dejection, depression and Isolation.
HAUSLA is an inspirational track to encourage cancer patients & their caregivers with a feeling of Strength, endurance & mostly to never lose hope.
Cancer today is treatable and manageable. We are sure that the launch of HAUSLA will certainly go a long way to boost the morale of those, who are suffering & give us all the satisfaction of sharing the pain, the emotions, the agony and the sufferings of the cancer patients & their families.