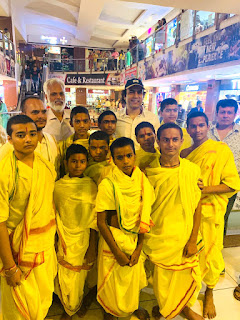 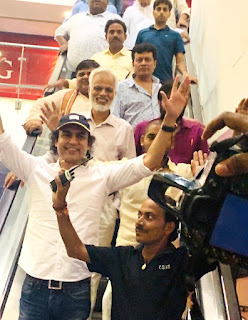 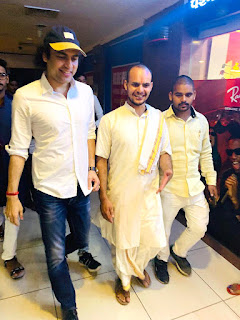 The premiere show of Aazaad starrer AHAM BRAHMASMI was held on 6th September at IP Mall, Sigra, Varanasi. The film is the first ever mainstream cinema of the world in Sanskrit language and it is produced by Kamini Dube for The Bombay Talkies Studios.
Earlier on 3rd September, the film's trailer and one song was launched at HT Parekh hall,Ahmedabad and the event was held by the Ahmedabad Management Association and Samskrita Bharati. which honoured nationalist filmmaker Aazaad by the Chief Guest Dr. Kirti Premji bhai Solanki (Senior Politician and Hon'ble Member of Parliament - Lok Sabha, Ahmedabad.
Aazaad was hailed for making a historic and meaningful mainstream Cinema in the Sanskrit language.
The mega film AHAM BRAHMASMI is created by the Military school alumnus and the internationally acclaimed filmmaker Aazaad whose previous masterpiece RASHTRAPUTRA was screened at the prestigious 72nd Cannes Film Festival on May 21st at Cannes.With great enthusiasm and pride, legendary film company The Bombay Talkies Studios created history once again by holding the premiere show of the film in the cultural and spiritual capital of the World i.e. Kashi, Varanasi.
Writer Director Editor and Actor Aazaad alongwith the unit of The Bombay Talkies Studios were also present at the premiere which turned out to be a memorable event.
By Santosh Sahu
Share to: