Thrilling trailer of “Yeh Hai India” is out 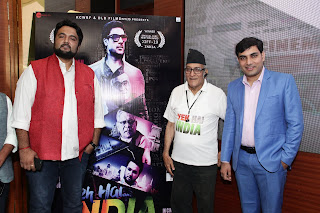 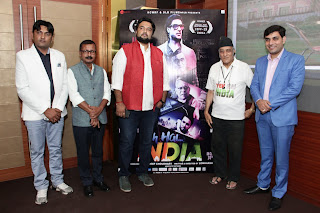 Mumbai : After Ek tha tiger and tiger zinda hai, actor Gavie Chahal is now going to present the glorious story of India through a film named ' Yeh Hai India. The trailer of Yeh Hai India had been launched at The View, Andheri, Mumbai on 30th April with much fanfare. On this occasion, director Lom Harsh, producer Sandeep Chaudhary, actor Gavie Chahal, Mohan Aghasey, Antara Banerjee, Surendra Pal, Major Vikramjit, Ajit Sidhye, Sadanand Sharma, singer Raja Hassan, Karamveer Chaudhary, Distributor Gurdeep Singh Sandhu, presenter of the film Swapan Bose and on behalf of Powered boy company Aircom, Rajesh Kumar were present .The special guest at the program was India's leading social welfare worker at the global level Mr. K N Singh Rathod (Director WMC) was also present.
Under the banner of DLB films, Yeh Hai India is presented by KCWRF and co-presented by Aircom company. The film is directed by Lom Harsh and produced by Sandeep Chaudhary. The film’s music is amazing and giving goosebumps.
Yeh Hai India, follows the story of a 25 years old NRI, who is born and brought up in U.K and shares the same stereotype views of India, which is known for its vast population, pollution and poverty. However, protagonist finds new development in media or probably an 'other side of same coin' of India, which is also known for successful mars mission in first attempt, a nation which proudly holds title 'God of Cricket' for Sachin Tendulkar, who is again an Indian and a nation which is known for its holy generosity with icons like Mother Teresa”.
The trailer is giving glimpse of the culture and beauty of India. It is also showing the reality of our society.  “Yeh Hai India” has already been big hit on its world premiere. It had also been screened at Cannes film festival, Google and Facebook Headquarters and made Indians proud worldwide.
The film has already won best film and best director award at the FOGSV Film Festival, in the US and a special jury mention award at JIFF.
The movie is in Direction of Lom Harsh, till now his every film is been an award winning. He is a spectacular director with amazing direction skills. Lom Harsh is an Australian citizen but his native is in Rajasthan. Till now he has won more than 25 awards and nominations for his films.
By Santosh Sahu
Share to: