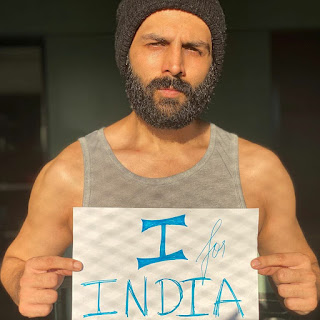 With the nation being under lockdown, workout regimes, work-schedules and several other things that constituted our daily life has hit a pause-button. But looks like nothing mentioned above has come to a halt for Kartik Aaryan. Despite no shoots being held right now, he’s currently busy with his hit chat shows Koki Poochega. The actor is doing extensive research on each of his interviewee and later even sits through the never-ending task of editing and rendering the final clipping (who can forget that stressful post of Kartik Aaryan) and talking about workout, looking at his last post, looks like Kartik Aaryan has not taken a break from building that beefy-body.
Kartik Aaryan shared a post yesterday, where he told his fans that he will be a part of Bollywood’s first ever virtual concert – I For India, pleading people to make donations for the nation to fight against the pandemic. While his act was surely applauded by everyone, what grabbed eyeballs was his hot avatar. The actor was seen in a sleeveless tee, giving us a glimpse of his toned arms and his beefy-avatar. The actor is surely indulging in some strenuous home workouts and not giving his washboard abs and toned arms any break. What’s more, his quarantined-beard look is surely making him look hotter than before. Few weeks back the actor was confused whether he should get rid of the facial fuzz and even asked his fans to help him out. His followers gave him a thumbs-up for his beard-avatar and asked him to keep to continue with the fuzz. Some even drew comparison with the Professor from the famous Netflix series’ Money Heist. Aaryan is surely giving himself a hot-transformation amidst quarantine and netizens surely can’t handle his hotness anymore!
Kartik Aaryan’s beefing up is also possible for his upcoming films in the pipeline. While he still has some portions of Dostana 2 still left to be shot, he also has Om Raut’s action drama. In the former while he might give us a déjà vu of John Abraham’s act and those iconic yellow-trunks, for the latter and his first action film, he will surely be seen in a beast-avatar to fly punches and kick some goons like never before.
Kartik Aaryan like several other celebrities rose to the occasion and participated in the virtual concert to raise funds. Apart from that he has been doing a stupendous performance as a chat host in his internet-breaking Koki Poochega. The actor even contributed Rs 1 crore to the PM CARES Relief Funds and got the nation talking about his heroic move at such a young age. Truly a gem in Bollywood!
By Santosh Sahu
Share to: