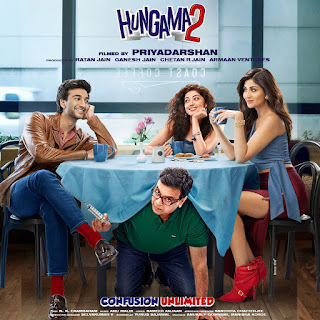 Hungama 2 makers unveil new poster on Meezaan Jaffery's birthday, and this one promises a great taste of comedy, fresh chemistry and entertainment unlimited.

After garnering a tremendous response on the first poster of one of the most anticipated comedy franchise of the year, the makers of Hungama 2, have unveiled a new poster of the film today. This comes in as a big treat to the fans of the comic caper on actor Meezaan Jaffery's  birthday as he brings in his big day on the sets of the film, shooting in picturesque Ooty.
The makers give us a glimpse of fresh chemistry between the actors with a dose of comedy and entertainment. The new poster has certainly heightened the excitement amongst the audience for this Priyadarshan directorial.
Says Producer Ratan Jain, “Our new poster was meant to highlight the theme of unlimited confusion that the film is premised on. What better day to share the new poster with our fans than Meezaan’s birthday. I am extremely happy and proud of Meezan’s dedication on the film and the infectious energy he brings on the sets is inescapable.”
The film also features the versatile actor adored for his comic timing, Paresh Rawal, the super sassy Shilpa Shetty Kundra and debutant Pranitha Subhash along with comedy doyens Johnny Lever, Tiku Talsania, Manoj Joshi, Rajpal Yadav and Ashutosh Rana.
Produced by Ratan Jain, Ganesh Jain, Chetan Jain and Armaan Ventures and directed by Priyadarshan, the comedy multi- starrer, Hungama 2 is slated to release this year.
By Santosh Sahu
Share to: