Director Prithviraj Oberoi starts shooting for his next after Love Shots 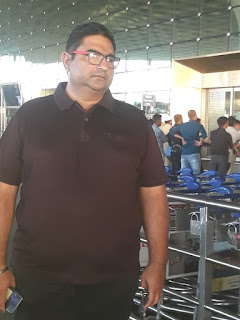 We met up with Prithviraj Oberoi at the Mumbai international airport and proceeded to a suburban 5 star hotel where he was shooting. We are surprised not to see anybody from the unit.

Q. As usual landed in Mumbai and straight to work?

Q. You seem to have erased the word rest from your life?

A. I get tired mentally. Not physically. Anyway had too much rest. Was sitting in the lounge followed by a comfortable flight. I don’t need more rest than the amount I'm getting.

Q. How come there is nobody from the unit?

A. I prefer to reach the location at least 2 hours prior to the call time given to others. The direction department should be here soon. I brain storm, revisit whatever I have planned before the final execution.
I strongly believe that a shooting set is only for execution and not preparation. No intellectual ambiguity on the location while the entire unit is waiting.
I need to be completely sorted before my unit arrives.


Q. It's rare rather impossible to come across such level of dedication?

A. Thanks for the compliment.

Three quotes have had a great impact on me:
1. Work is love made visible.
2. If you cannot do something bigger and better today,

don’t get off the bed And

As a matter of fact the only sport I play is badminton
because that needs 100% of the player’s mind and body.

As a batsman, I can start thinking while the bowler is
taking run up.

While swimming I could be thinking anything while swimming, but badminton doesn’t allow that to me. It's just a personal opinion which could differ from that of others.

This is another reason I chose to meet up before the shoot rather than during lunch because once the shoot starts, for me, there no scope to accommodate anything other than the day’s work.

So, there’s no other way of working I know other than this.

Q. You have studied at the New York University. Learnt music from the Royal School of Music, London. Which industry or which sensibilities are most difficult according to you?

A. I think in a way it's the Hindi Film Industry. That’s
because all have to come across supremely conventional
even in the most unconventional situations of a film.
The actors have to look conventional.
The director has to present himself with conviction.
The writer has to narrate with conviction, and so on.
That’s because conviction shows on the screen which plays a very important role in the audience accepting a film. To my mind, in Hindi films, conviction is more important than rational.

While being treated to some amazing Middle Eastern coffee:
Q. Do you think your previous film 'Love Shots was unconventional?

A. Well that’s for the audience to decide.
According to me, the story was out of the box.
The topic of love child was untouched.
The characterization of the leading lady was
unconventional compared to the standard Hindi film leading lady.
The reaction of most characters was non-conforming which
provided dynamism to the thinking of minds.

Q. Is another book en route? Also tell us about your earlier
books “Kalam Ke Qatre” and “Sargoshiyon Ki Guftagoo”?

A. Very much. And if I don’t write, the other two books will
kill me.
Jokes apart. The next book will complete a trilogy of sorts.
Kalam Ke Qatre was about the “Black and White” of life.
Sargoshiyon Ki Guftagoo was about the grey shades of life.
Some, which we have accepted in our everyday lives.
The next book will be about the “Black” of life and living.
A point I like to share is that when I started writing
Kalam Ke Qatre, I thought it is purely to fulfill a
personal desire. Response received for Kalam Ke Qatre made
me write Sargoshiyon Ki Guftagoo.
I was wrong to think that Urdu poetry and that too by a
new writer and not even published by a known publishing
house will have a very small market. After years of
publishing, copies are still being sold.
So, follow your heart, follow your passion. Do whatever
gives you happiness but whatever you do, do it with utmost
integrity.
By Santosh Sahu
Share to: