AAZAAD SPEAKS ABOUT THE SUCCESS OF RASHTRAPUTRA IN CANNES FILM FESTIVAL 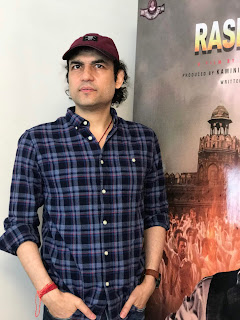 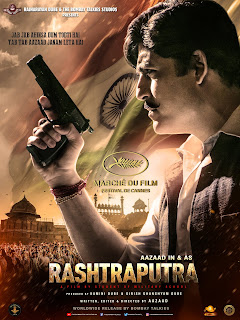 Film Will Now Release In 28 Languages -Another World Record
Writer-editor-director and actor Aazaad of RASHTRAPUTRA told the media that he is extremely excited  to see the success story of the film spreading world wide. After the film RASHTRAPUTRA was screened on 21st May at the Cannes Film Festival, Marche Du Film,,it has been screened to the world audience, now Aazaad has decided to release as many as 28 languages of the same film RASHTRAPUTRA all over the world which will be a record for a filmmaker . RASHTRAPUTRA will be releasing in English,Spanish,German,French, Japanese,Turkish,etc. and later in India also in Marathi,Gujarati,Bengali,Oriya,Assamese, Bhojpuri,Punjabi,Tamil,Telugu,Malayalam and Kannada languages too.
Aazaad adds :"  RASHTRAPUTRA is a film which has come from India and  the film carries the message that one must love the country and die for the country. The role which I have played is that of the revolutionary leader Chandrashekhar Azad who lived for the country and died for the country. It was for the first time that a film which depicts a true revolutionary leader like Chandrashekhar Azad was shown to the world audience in Cannes Film Festival and also the film's producer Kamini Dube was the only Lady producer from the whole of Asia whose film RASHTRAPUTRA was screened in the Cannes Film Festival which is a proud moment for India and also for the film fraternity. Also the film RASHTRAPUTRA shows that  Chandrashekhar Azad is a timeless cinematic creation. Azad was, he is and he will be the relevant hero of all times. Time changes but the problems remain the same in different looks. What would Azad do, how he would react if he was alive today ? He would be the same motivational force for today's youth as he was in his life time. RASHTRAPUTRA can be described as a great motivational movies with high voltage drama and entertainment values for the youth as well as the enlightened audience of 21st Century.
AZAAD is the film of The Bombay Talkies Studios and Producer Kamini Dube who also introduced Aazaad in RASHTRAPUTRA as the writer,editor ,director and actor. He plays the title role of Chandrashekhar Azad in the film. The film has made a big comeback of the legendary and the biggest banner of Indian Cinema which is The Bombay Talkies Studios. It was founded by Rajnarayan Dube, the  legendary and iconic personality who founded the Bombay Talkies Studios and made 115 films from 1935 till 1955. Also, this legendary banner has introduced iconic actors like Ashok Kumar,Dilip Kumar,Dev Anand and Raj Kapoor. The Nightingale Of India Lata Mangeshkar,Asha Bhosle,Suraiya,Manna Dey and the iconic singer,actor,filmmaker Kishore Kumar were also introduced by The Bombay Talkies Studios. The greatest filmmakers like Satyajit Ray,Raj Kapoor,V. Shantaram,Guru Dutt,Hrishikesh Mukherji,L.V. Prasad,Bimal Roy,Shakti Samanta ,Kishore Sahu,Phani Majumdar etc had started their careers with The Bombay Talkies Studios.