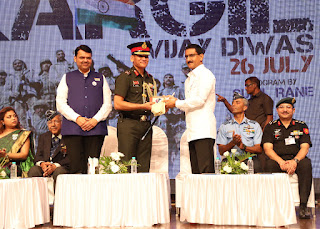 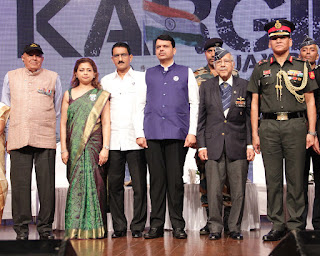 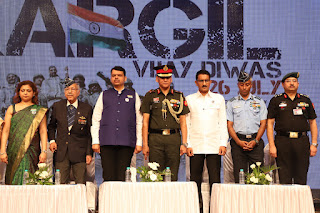 Mumbai : Atharva foundation has organised a program on (Friday) 26th July 2019 to celebrate 20th Kargil Vijay Diwas, to commemorate the real heroes of the country. The event was held at Shanmukhananda Hall, Mumbai. The program was followed by the felicitations and recitation of five stories of the brave hearts of Kargil war along with patriotic cultural program.
The chief guest of the event was the Chief Minister of Maharashtra Devendra Fadnavis and the guest of honor are Wing com. Jag Mohan Nath (Bar to MVC) (Retd), Sub Hon. Capt Sansar Chand (MVC) (Retd) and Lt. Col. Manoj Kumar Sinha (SM) (Retd), Maj. Akhil Pratap (Retd), Brig. Vasant Patil SM, VSM (Retd). The convener Col.Sudhir Raje (Retd), and the Joint Conveners: Col.P.K.Kapoor (Retd), Col.N.V. Shauche (Retd) and Maj.Ashok Kaul (Retd) are organizing the celebration.
The program was organised to honor the martyrs Captain Jintu Gogoi (VRC-Assam), Subhedar Hony.), Captain Amol Kalia (VRC-Nangal, HP), Captain Vijayant Thapar (VRC-Delhi), Captain Anuj Nayyar (MVC-Delhi) and Maj. Padmapani Acharya (MVC-Telangana).
The Kargil war happened between India and Pakistan in the Kargil district of Kashmir and along the Line of control (LOC). The Kargil war victory was made possible by the heroic efforts of the brave troops of Grenadier Yogendra Singh Yadav, Lieutenant Manoj Kumar Pandey, Captain Vikram Batra and Rifleman Sanjay Kumar for their bravery and velour.
Sunil Rane (Chairman of Atharva group) quoted “this year on 26th July, Kargil Vijay Diwas is going to complete its 20 years and with this, the sacrifice of the soldiers for the nation will be
remembered. The sacrifice done by them is irreplaceable and unforgettable. They always remains alive in the hearts of the countrymen. The Kargil war will forever remain etched in the memories of Indians. This event is to pay homage to the sacrifice made by our national heroes who fought fiercely and laid down their lives for the nation.