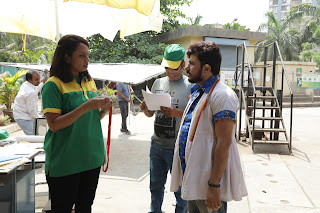 Singham Returns actor, Smita Tambe lands the female lead in Hawa Badle Hassu. Smita will be seen essaying the character of Arti Chauhan a student pursuing PhD in Environmental sciences while working at a CNG pump station during the day.  The power house actor is a much sought after name in the Marathi Film industry and has been making her presence felt in Bollywood too with her upcoming film Panga alongside Kangana Ranut.
Arti meets Hassu (played by Chandan Roy Sanyal) & his quirky eco friendly autorickshaw at the CNG pump station where she works during the day. She is one of those people who has no malice in her heart. She believes that the purpose of human life is to “be good, do good”. She is the one who discusses with Hassu the benefits of clean fuel and the environment. Hassu is impressed by her zeal and often ferries her to and fro the University and Gas Pump. Over time they become very good friends .Just good friends, or is there a spark?
Talking about her character Smita says, “Arti becomes Hassu’s constant companion and a comrade in his crusade. She is a very upright person and also very environment conscious which a common ground for their friendship to develop. She gives him unspoken support and strength to carry on with his mission. Arti has doubts about Hassu as an auto driver, as his knowledge and wisdom deems him worthy of something much better. She listens with awe at Hassu’s daily shenanigans with his passengers. And unwittingly, becomes another soldier in Hassu’s crusade against air pollution”.
Smita added, “Hawa Badle Hassu is an urgent and imperative subject. It is alarming how human race has been abusing the environment and now we are sitting on a ticking bomb, we don’t know when will it explode, nature will revolt and the days are not far away. Subjects like these should be explored in cinema, web series and television. By that count Hawa Badle Hassu becomes a conversation starter as there is hardly any content made around such subjects”.
Hawa Badle Hassu is an environmental SciFi thriller which starts as a slice of life story and expands into a full fledged sci fi drama. It is directed by Saptaraj-Siva, Co- Written by Protiqe Mojoomdar and produced by Handyyman. The series is slated to launch soon on Sony Liv.
By Santosh Sahu
Share to: