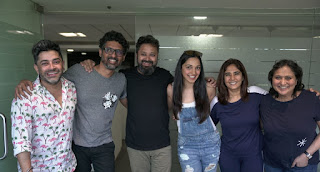 Kiara Advani who has been eagerly awaiting the release of her highly-anticipated film, Kabir Singh, has been recently roped in for Emmay Entertainment's (Monisha Advani, Madhu Bhojwani and Nikkhil Advani) next, Indoo Ki Jawani, co-produced by Niranjan Iyengar and Ryan Stephen. The film marks the Bollywood debut of Bengali writer-filmmaker Abir Sengupta.
As interesting as the title sounds, the coming-of-age comedy will see Kiara portray the role of Indoo Gupta, a fiesty girl from Ghaziabad whose left and right swipes with a dating app results in hilarious chaos.
Informs Nikkhil, "Sometime ago, my daughter Keya came to my office and while looking at the posters of the films we have made so far asked why all of them had only men and not women. Around this time, I heard this story about a female protagonist that Niranjan and Ryan brought to us and fell in love with. We are glad to have Kiara on board for the project.
Excited about her first female centric film, Kiara informs, "Indoo is edgy, lovable and quirky. It's really exciting and relevant because the story is set in today's time. This is a special script and Nikkhil and I were meant to do it together. I can't wait to start shooting the film.
Indoo Ki Jawani goes on floors in September this year and is produced by Monisha Advani, Madhu Bhojwani & Nikkhil Advani along with Niranjan Iyengar and Ryan Stephen.
By Santosh Sahu
Share to: