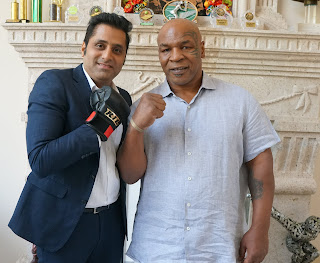 Legendary Heavyweight boxer Mike Tyson is all set to launch India’s first global mixed martial arts – Kumite 1 League (K1L) in Mumbai. The Fight Night will be held on 29th September at the NSCI Dome in Worli, Mumbai. Supported by the All India Mixed Martial Arts Federation (AIMMAF), the league will bring together eight countries from around the world.
The inaugural season will see eight teams representing different countries fighting for the top spot. Each team will consist of nine fighters of which two will be women. The players will be selected through an auction process and will be hosted in India, Dubai, Las Vegas and London. Countries like India, Pakistan, Middle East, Russia, USA, UK, China and Philippines have already confirmed their participation. K1L has scouted for leading fighters in the Indian MMA circuit - Kantharaj Agasa, Sumit Khade, Hardeep Rai, Mohammed Farhad, among others. India’s top women fighter Priyanka Jeet Toshi will be seen fighting tooth and nail to win the title.
Recently, Bappi Lahiri composed a jingle to welcome Mike to India. The celebrated music director said it is a perfect Bollywood way to greet the boxing legend. Bappi Da will also interact with Tyson when he gets up on the stage through video conferencing as he will be in the USA while Tyson is in India.
This marvel is the brainchild of Mr. Mohamed Ali Budhwani, the CMD of Toyam Industries Limited, a successful entrepreneur, a passionate sportsman and a hardcore MMA fan. He said, “Kumite 1 League aims to bring together the best forms of martial arts from around the world and promote it on a global scale. Our aim is to create a mass following for MMA and spread the message of discipline, focus, resilience, patience and willpower among the youth. My team has spent the past few years planning and doing extensive research on the sports landscape in India. We saw a massive dearth in MMA, a sport which has huge potential to flourish in a country like India that has a rich history of the sport. We are leaving no stone unturned to make this the biggest MMA league in the world. India will soon be on the global map as a premier destination for MMA.”
He added, “ Mike Tyson’s association takes the league to a whole different level. We managed to convince the legendary boxer to come to India and flag off this league which will grow in the future and provide job opportunities to many people. The idea resonated with Mike Tyson and he gave his consent. It is a great honour to host him and we have to now show him that India has lots of talent and if we get the opportunity we can really flourish”.
In order to unearth potential MMA fighters of Indian origin, K1L will be soon launching a grassroots talent hunt programme where raw talent from different parts of the country will be identified, nurtured and trained to fight on an international level by expert trainers. In association with AIMMAF, the programme will scout for the raw, untapped MMA talent across the length and breadth of India. In its first season, the talent hunt will be hosted in Mumbai, Delhi, Kolkata and Bengaluru, and is set to begin soon.