No.1 Dramebaaz season 3 - Journey from orphan house to Bollywood

The Press Conference of the show "No.1 Dramebaaz" Season-3, Produced by Vijay Bhardwaj, under banner of Trivision Films Pvt Ltd. took place on 24th January, 2018 at 'Raheja Classique Club', Andheri west, Mumbai. Many orphans along with  Judges & Anchors had come and enjoyed the evening. The legendary actor Mr.Prem Chopra gave many acting tips to  participants. Chief Guest for the evening were Director Rajkumar Santoshi, Mehul Kumar, actor Ehsaan Qureshi and Phool Singh. The event was followed by cake cutting by kids and guests. Guests Sunil Pal & Ehsaan Qureshi entertained the audience with their comedy skills at their best.

It was a great evening when following the overwhelming success of the first & second season of India’s top reality show "No.1 Dramebaaz" Season 3 will regenerat the audience through heart-warming performances by flamboyant kids from 4 yrs to 16 yrs which includes the orphan kids also. The third season of the incredibly entertaining realty show will have 12 one hour gripping episodes and promises to be bigger and better than the first & second season.
Bollywood's veteran actor Prem chopra, Mushtaq Khan, Siddhesh Pai, Kanika Maheshwari and Vijay Bharadwaj will judge the energetic and incredibly talented kids. Jashn Agnihotri and Comedian Sunil Pal will grace the show by their anchoring talent. This season is very different as 20 % of contestants will be Orphan kids. In the history of reality show "No.1 Dramebaaz" Sesaon 3 will be the show where the orphan kids will show their talent of Acting and Dancing.
The shoot will start from 27th January and the show will telecast from 25th February 2018 on TV Channel E24. The practice and grooming is going on. The qualified participants belongs from different states of India.
Mr. Anil Mittal CMD Satmola Group, Mr. OP Khanduja Business head DS Group, Mr. Yogesh Lakhani MD Bright outdoor Media , Mr. Vahid Ali MD Eurofobes ,Mr. Arjun Singh MD light & Craft media including the judges & anchor of the show and many Bollywood celebrities, directors and producer were present there to motivate the orphan kids and to support a great thought. Every one including Media appreciated Mr. Vijay Bhardwaj , the producer of the show for such initiative.
Mr. Vijay Bhardwaj said it took almost 3 years now the people are supporting and appreciating the same.
The team behind the camera also graced the occasion with their presence, Director Neeraj Bhasin , DOP Surender Rawat , Assistant director Asif Khan and many more . 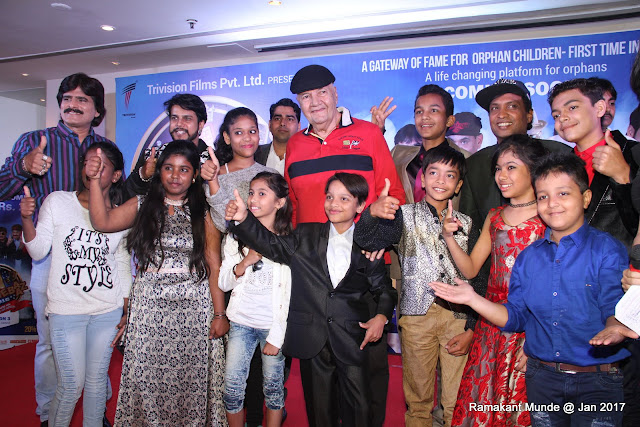