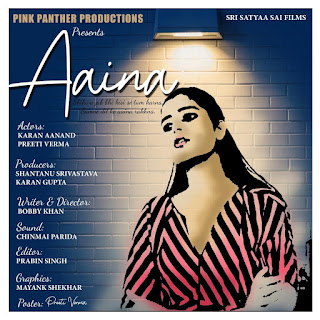 The world has come to a screeching halt as a result of the coronavirus outbreak. As the country enters lockdown 5.0 of the nation-wide lockdown, a slew of Bollywood celebrities - Amitabh Bachchan, Priyanka Chopra, Rajinikanth, Ranbir Kapoor, Diljit Dosanjh, and Alia Bhatt among others, teamed up for a short film called ‘Family’, And now Bollywood actor Karan Aanand has also made a short film during the lockdown named 'Aaina'.
The film is meant to stress the importance of staying at home, staying safe, working from home, and most importantly paying to the daily wage workers and house cleaners. Aaina is premiered across the globe through Pink Panther's Youtube channel, Check out the link below.
The film begins with the fighting scene of Karan Aanand and Preeti Verma in the midst of lockdown which is based on household fights where the wife opposes the husband for paying the house help even though they are not coming to work. While shooting this film Shantanu said, "During lockdown, loss of jobs and consequential migration of workers has made it worse. Therefore, we decided to make a short film on this burning issue and bring out the human side of it. It was a challenge to produce the film under lockdown conditions but I am delighted our artists could still do a great job. I am sure everyone will enjoy the film.
''There was no infrastructure, no facility and not even co-actors were there to coordinate, and you've to give the reaction as they're in front of you, there was no light man, no cameraman, there was absolutely no support, so it was a big challenge to shoot this film''. Actor Karan Aanand said.
The film is made under the banner of Pink Panther Production, Karan Aanand and Preeti Verma are starring in this film. Film 'Aaina' is directed by Bobby Khan and produced by Shantanu Srivastava and Karan Gupta.