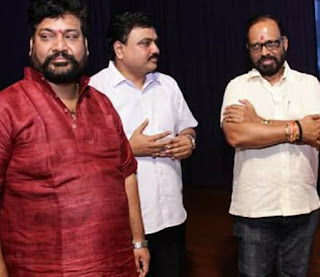 Mumbai: With COVID-19 cases spiking everyday in Mumbai and film shooting unlikely to resume soon, film bodies have written to the centre, asking for its intervention in helping the industry tide through the crisis. The federation of Western India Cine Employees (FWICE) that represents associations covering 32 different crafts of the workers and technicians of the media and entertainment industry, wrote to Finance minister Nirmala Sitharaman on Saturday, "The media and entertainment industry is among the highest revenue generating industries and plays an important role in the Indian economy. It is very sad that the industry has been overlooked by the government. We have sent numerous correspondences to the PM and I&B ministry for providing aid to hundreds of workers and technicians associated with the industry who are categorised as daily wage earners, but have not received any help from the government.
B N Tiwari, President of Federation of Western Indian Cine Employees told that as film, TV and web show shoots are not likely start till the end of June or first week of July, and daily wage earners – spot boys, stuntmen, makeup artists, light men and more who have been out of work since lockdown are the worst hit.
Producer bodies such as Producers' Guild of India, actors such as Amitabh Bachchan and Salman Khan, and production houses such as Yashraj Films have donated towards COVID Relief fund to provide monetary aid to 35,000 film crew members members and a month’s ration essentials. "However, the industry is vast and the daily wage workers count is huge. Many are yet to get any relief," the letter pointed out.
Tiwari added that while discussions to resume work has been going on with government officials, it is not likely that shooting will begin soon.
"The idea that shooting can be done in green zones will never work, as people in those areas will never allow that. More than 150 serials and 100 web series are being made. Taking everyone to green zones is not feasible...The condition in Mumbai is getting worse. We have a huge section that depends on daily wages, and many of them have physical disability," Tiwari, General Secretary Ashok Dubay & Treasurer Gangeshwar lal Shrivastav said.
"If permissions are given to carry out such post-production activities of these projects, which can be done in closed studios with minimum workforce, it would be a great relief to the producers who have invested a lot. Post-production work includes activities such as editing, dubbing, sound recording, music recording, special/visual effects, can begin," he added.
I&B ministry started talks with film bodies recently, and is exploring options of having a common SOP for shooting across States.
A delegation of film makers had also met Maharashtra CM Uddhav Thackeray recently over the concerns.
Tamil Nadu, Telangana and Karnataka have started "limited shooting activities" since last week, under strict guidelines, which include "no shooting of wedding scenes, designated seating areas with 6-ft distance between them, compulsory use of three-layered medical masks by all professionals.
Contactless temperature checks of the unit every morning, presence of doctor and nurse on set for three months since resumption of shoots are among the other guidelines being followed.
Experts have estimated Indian film industry will lose an estimated Rs 2,500 crore, with theatres expected to reopen only by August.
By Santosh Sahu
Share to: