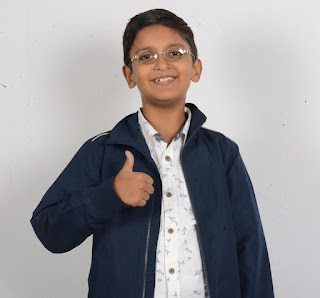 Has been selected by White Hat Jr, as one of the 12 students to go to Silicon Valley to meet Google Scientists, Waymo Engineers and noted Venture Capitalists

Mumbai : A World Health Organisation report states that at least 2.2 billion people have a vision impairment or blindness, of whom at least 1 billion have a vision impairment that could have been prevented or has yet to be addressed. In India, almost 8 to 10 percent of children suffer from refractive error and have never worn corrective glasses. To tackle this situation, 9-year-old Garvit Sood from Mumbai has created the Drishti App, which helps people to screen their eyes to detect any eye-related or vision issues and get the required treatment on time.
Eyes are our windows to the world and having vision issues can cause a lot of discomfort to anyone. Being a victim of late detection, which was later identified as astigmatism, Garvit wanted to utilize his learning of coding on WhiteHat Jr’s platform to create an app to solve this issue. It is an easy to use app where the user needs to read alphabets/numbers of different sizes on the screen of their phones. According to their level of reading success, the user will be notified of his vision score. It can tell the user whether there is any need to go to the doctor for further checkup or not. The app can also help people living in rural areas where accessing doctors is tough. Even doctors can use this app to test the eyes of their patients for an initial diagnosis.
Garvit is one of the twelve winners of the Silicon Valley Program conducted by WhiteHat Jr. His app was selected after vetting 7000+ entries from across India, where kids were invited to think of an original idea that solves a real-life problem and code an app independently. As a part of this program, he will visit the Silicon Valley in the US to pitch his app to top venture capitalists (VCs) like Nexus Venture Partners and Owl Ventures. During the weeklong trip, he will also meet some noted Silicon Valley entrepreneurs to learn valuable lessons on entrepreneurship, get an opportunity to visit Googleplex and interact with their engineers, as well as visit the Waymo facility to experience driverless cars and talk to their product managers.
“Kids today are very aware of societal issues and want to contribute in their own way to address them. We are witnessing many young kids like Garvit Sood creating truly transformational and high impact apps within just 40 hours of coding on the WhiteHat Jr platform, that will make a lasting impact on the world.”, said Karan Bajaj, Founder and CEO, WhiteHat Jr.
All these kids are learning to code on WhiteHat Jr, an EdTech startup that teaches coding to kids between 6 to 14 years of age. Teaching cutting-edge curriculum on technologies like AI, robotics, machine learning and space tech, the startup aims to harness natural creativity of kids and shift their mindset from being consumers to creators at an early age. After seeing great success for its online platform, the company is working to bring its AI and robotics coding curriculum to schools across the country. They are also soon starting a 15 under 15 fellowship wherein WhiteHat Jr will help the top 15 kids on the platform incubate their own startups and provide a $15000 fellowship to them.
By Santosh Sahu
Share to: