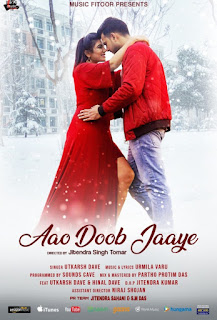 MUSIC FITOOR, a well known record label music company has brought you a must watch song 'Aao Doob Jaaye' during this Valentine Week.

Mumbai:- Released on 7th February 2020 'Aao Doob Jaaye' is a true love story, full of romance and melody. It is beautifully written and composed by Urmila Varu sung by Utkarsh Dave in his magical voice.
The story is directed by very talented Jitendra Singh Tomar assisted by Niraj shojan and his D.O.P. Jitendra Kumar. Utkarsh Dave singer from United Kingdom, Leicester, is featuring in this video with his wife Hinal Dave.
Utkarsh has represented U.K in an international talent special episode (Rising Star 2) on Colors T.V.
The beautiful real life couple, together with the melody of the song and the direction has given the story a real touch of romance which is just right for the valentine's Day.
Within few hours of release it has received tremendous, overwhelming response and is doing very well on all the digital platforms worldwide.
By Santosh Sahu
Share to: