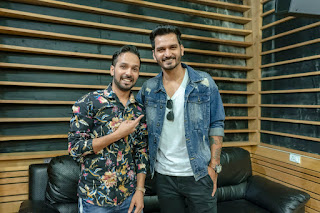 ● Once again, StarMaker App hunted for best of singing talents online through the Supernova Project Season 3
● StarMaker produced and created a single music video for the Winner Wiki Heer

Mumbai : For music lover and singers, StarMaker App launched the most thrilling talent hunting event online --- Supernova Project, is a nationwide online contest for the talented emerging singers launched by StarMaker App that hunted the most talented singers nationwide. The Supernova Project Season 3 commenced on 21st November 2019, where the participants could post their cover or freestyle song/video in StarMaker mobile.

Singing sensation “Gajendra Verma” mentored the participants of Supernova Project Season 3.
The music sensation ‘Gajendra Verma’ was on board for the ‘Supernova Project Season 3’ and mentor their contestants. This unique collaboration of young and energetic talents like Gajendra Verma with StarMaker - The biggest social-singing app in the country, made it the most exciting event for Indian youth.
Supernova Project is the largest online music competition in India currently, with more than 400,000 participants in a single session. Majority of the contestants joined from Metro cities like Delhi, Mumbai and Kolkata. The top contestants were selected from the participants by public voting. Each day the competition saw around 4 million+ votes coming from StarMaker users. The mentor Gajendra Verma went live on the StarMaker App on the final day of the voting to announce - Wiki Heer, a Mumbai resident as the winner of Supernova Project Season 3. Wiki Heer has been participating in Supernova contest from season 1.
StarMaker has yet again changed the life of the winner from being a singing enthusiast to become a singing superstar in Supernova Project Season 3.
The song ‘Hone De’ by Wiki Heer, was released on YouTube on 26th December 2019. Wiki Heer recorded his first music video, produced and directed by StarMaker. Wiki Heer took just two days to record song and shoot Music Video, which has well-appreciated by the viewers as their feedback about this song are good and that, Wiki Heer's voice is amazing. The Music Video got more than 500k views after release. That’s not all, Wiki Heer also took part into the Mirchi Top20 TV show which was aired on 28th December on Zoom TV. Wiki Here will also be promoted all over the StarMaker App and will also be featured in StarMaker’s Social Media handles. StarMaker in itself has a strong social media presence of 2+ Million on StarMaker Official In-App Page, 1.5+ Million Facebook followers, almost 40K followers on Instagram and 200K YouTube subscribers.