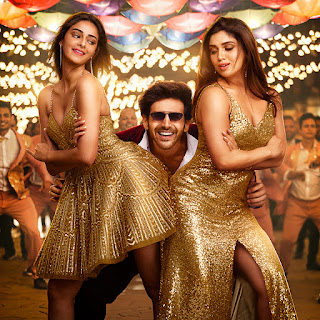 Kartik Aaryan, Bhumi Pedenkar and Ananya Panday starrer Pati Patni Aur Woh is making the headlines for all the right reasons and has become the talk of the town. Last week, after dropping their first song Dheeme Dheeme,  which has gone viral on the internet and several lip-sync apps and even netizens taking the dance challenge using the hashtag #DanceLikeChintuTyagi, the makers of Pati Patni Aur Woh are all set to release their second song. The team has recreated ‘90s hit number, Ankhiyon Se Goli Maare and are all set to release it today. Kartik is specially flying down to Delhi from Patiala to launch the party number with his leading ladies, Bhumi and Ananya.
Stepping into dancing shoes of Govinda and Raveena Tandon, Ankhiyon Se Goli Maare will see Kartik shaking a leg with his ‘Patni’ Bhumi and ‘Woh’ Ananya. The actor’s moves in Dheeme Dheeme has made the internet go crazy and looks like the trio is going to teach us few more signature steps this party season. Choreographed by Farah Khan, this song is a perfect tribute to the evergreen superstars and Kartik-Bhumi-Ananya have done some steps and antics will make this one an instant hit. The recreated song is a peppy dance track and it will relate with today’s youth. The vibe and tone of the song is also very colourful and vibrant, it promises to be another blockbuster for the team. People who have seen the rushes of the song say that Kartik’s chemistry with both his lead actresses is something to look forward to. This song will definitely keep everyone hooked as the old version still has a high recall value.
Producer Bhushan Kumar (T-Series) says, “Ankhiyon Se Goli Maare is my personal favourite from the album. Since it has the 90s magic with a modern twist, the song brings back lots of memories. The trio - Kartik, Ananya & Bhumi have done complete justice in this one. We hope the audiences love the modern version too.
Creative producer Juno Chopra (BR Studios) says, “Ankhiyon Se Goli Maare was the last leg of shoot and the entire team had whale of a time while shooting for it. Kartik, Ananya, Bhumi & Farah enjoyed to the fullest on the sets. Farah comes up with such funny situations that while shooting we were continuously in splits. We hope that just like our first song received all the love, this one too garners lots of love and appreciation.
Farah Khan says, "Ankhiyon Se Goli Maare is an iconic song and I agreed to do it because Juno is a dear friend. Hope this new foot tapping version appeal to the audience the way the original song did back then. We have tried to make it different and interesting but at the same keeping the essence of the original intact.
Talking about same actor Kartik Aaryan says, “This song used to be one of my favourite Govinda sir's track during my growing up years. We all have been an ardent admirer of his dancing style. I'm so happy that I got an opportunity to dance to it in my film. Also, I always wanted to dance on Farah mam's tunes and glad that here my that wish also got fulfilled. She has given some cool and fun moves to all of us. Ananya, Bhumi and I had blast shooting for it.
Singer Tulsi Kumar says, “We have all grown up listening to these peppy numbers which just remind you of so many things and memories. I have grown up to the 90’s music n getting an opportunity be a part of this iconic Govinda - Raveena Tandon number Is a dream come true. I have added some contemporary touch to this song which has been musically modulated by Tanishq Bagchi to make it more relatable to the new generation. But of course, the essence remains the same . You all are up for a musical treat with this party number.
Sung by Mika Singh & Tulsi Kumar and composed by Tanishk Bagchi, Ankhiyon Se Goli Maare is all set to become the biggest party song of the year and we’re ready with our dancing shoes.
By Santosh Sahu
Share to: