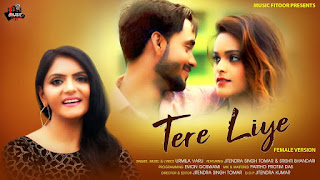 Jitendra Singh Tomar has worked in Indian film industry as an director and actor. At the age of 18 he started his career and has done a lot for work for TV and Film industry and also for Music companies like Zee Music and Shemaroo, etc. Since then he has established his own post production house and music company called JST Films.
Apart from direction, Jitendra Singh Tomar has worked as an actor in music video O Yaara, his first debut, which is a friendship song, released on Record Label 'Music Fitoor'.
After the success of O Yaara, he had been offered a role as actor and director in another music video, a romantic song by Music Fitoor called Tere Liye.
Tere Liye is a romantic song, where Jitendra has been paired with actress Srishti Bhandari; written, composed and sung by Urmila Varu, programmed by Emon Goswami, D.O.P Jitendra Kumar.
His work has been really appreciated by everyone, he has proved his talent not only as director but as an actor also. He is very passionate and hardworking person, and now he has many projects coming up on Music Fitoor and other Music companies.
By Santosh Sahu
Share to: