Viineet Kumar wins the Best Actor at the CCFA 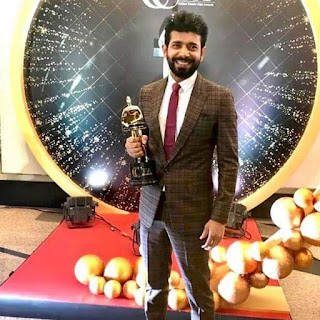 There are films which become great box office success and some which are acclaimed critically. Mukkabaaz becomes one of the movies this year which did fairly well at the box office and heaped great praise amongst the critics as well. Viineet Kumar who wrote and played the lead in the film finally got the much-deserved recognition this Sunday Night when he was awarded Best Actor in a Leading Role (Male) at the Critics Choice Film Awards.
This was the first edition of the Critics Choice Film Awards in India which also marked the debut success for Viineet Kumar as a leading actor. Viineet Kumar started his acting career by a rather small role in the 2002 movie 'Pitaah' and got noticed later for his performance in Anurag Kashyap's 'Gangs of Wasseypur'. After years of hard work and determination, he finally paves out a way for himself when he wrote and performed 'Mukkabaaz' in 2018. It took him 2 years to prepare for the role and in the middle of preparing himself as a boxer he even wrote a song for the movie, “Paitra”. His was called out as the Performance of the Year amongst many.
"I'm very honored and feel privileged to be present amongst such fine artists and stars. To be present here felt amazing in itself and to be awarded such a precious and big award just doubles the excitement. I'm truly thankful to Anurag sir for being there when nobody else was and to believe in me when nobody else would. This surely feels great and hopefully I can deliver many more performances like 'Mukkabaaz' to be able to grace this stage and prove worthy of this. " quoted a humble and thankful Viineet
Viineet received the award from the hands of the legendary actress Shabana Aazmi who was full of appraisal for the lad with her words, "This award has truly been awarded to someone completely deserving it. According to my belief, the only male actor who can portray the classic 'Angry Young Man' character on screen after Amitabh Bachchan is Viineet Kumar."
Viineet Kumar has been a part of movies like Gold, Gangs of Wasseypur, Daas Dev, Ugly, Bombay Talkies, Bombay Diaries and many more.
With 'Aadhar' and 'Bard of Blood' all wrapped up, Viineet is currently shooting for 'Saand ki Aankh' with which he is expected to raise the bar one more time for others.
By Santosh Sahu
Share to: