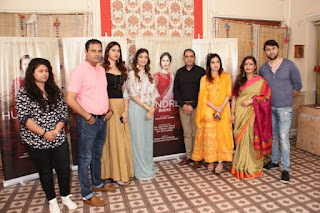 Dushyant Corporation's upcoming feature film" The Handred Bucks", was a grand opening in Future Studios in Goregaon, Mumbai. On this occasion, director of the film Dushyant Singh, producer Dr. Pratima Totlah, Vaibhav Tomar, Dr. Ritu Singh, along with the main story writer Kavita Jain, actor Jaid  Shekh, writer M Salim and composer Indrani Bhattacharya were present. It is known that actress Kavita Jain is debuting with the film.
Director Dushyant Singh said that the above film is based on a female centric subject, where one class has been focused on special suffering. At the same time, according to Kavita Jain, he is very excited about his film and considers it a godly gift for himself. As well as thanking director Dushyant Singh, he expresses gratitude to the people that he has chosen his choice for this challenging character.
Producer Dr. Pratima Totla  said that due to the female centric theme, the whole film revolves around the same character, while Vibhav Tomar says that working with Dushyant Singh ji is so enjoyable that we are associated with this sensitive subject. Dr. Ritu Singh sees this as a new experience for him as a producer. Dushyant Singh said that the above film will be screened at the international level. He said that the special premiere of the film has been held in Colombo in Sri Lanka on July 22, in which the institutions and noblemen of many countries will participate. Special preparations have also been made for the promotion of the film. The film shoot starts from 8th April. In July, the film will be ready for international performance.
By Santosh Sahu
Share to: