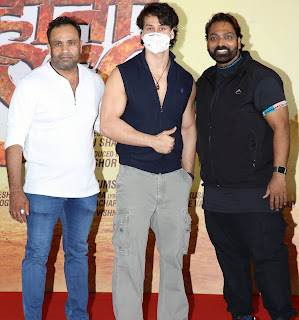 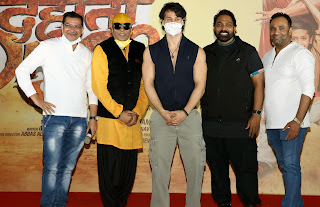 Manoj Sharma directorial Dehati Disco's film poster was successfully launched by the new dance sensation of India - Tiger Shroff. The poster was released at the mahurat event and it portrays the picture of a villager played by Ganesh Acharya carrying a child on his shoulders. This was the first mahurat event after the lockdown.

The film is being produced by Kamal Kishor Mishra of One Entertainment Film Productions in association with Prachi Movies and V2S Productions. The event became beautifully alive with Indian percussionist Drums Shivamani performing live on his drums.
Bollywood choreographer Ganesh Acharya plays the lead in the film and the action is done by Abbas Ali Moghul, while music is scored by Drum Shivamani. The shooting of the film commences from October 25 and the entire film will be shot in Lucknow, UP. It will be exciting to watch the choreographer in action. Ganesh Acharya said, "I am excited to be part of a film that involves dance and a social message associated with it. Sivamani is contributing music so what more can we ask for. The film will connect with masses and through the film we want to convey how any talented individual, whether he belongs to a village or town, can make it big in the world."
A dance film that revolves around emotions, director Manoj Sharma, who used to work as an assistant to Anil Sharma, said, "The film is an emotional drama and revolves around the youth of the country who really enjoy dancing. I am sure that with Tiger launching the poster people will look forward to this film and its social message." Manoj has done more than 50 music videos for Venus Records. He has directed films like Prakash Electronics, Chal Guru Hoja Shuru , SharmaJi Ki Lag Gai, Life Me Time Nahi Hai Kisi Ko and recently completed work on Khalli Balli with Madhoo, Dharmendra, Rajniesh Duggall, Kainat Arora, Asrani, Vijay Raaj, Rajpal Yadav, Yasmeen Khan, Mini Bansal and Ekta Jain.
By Santosh Sahu
Share to: