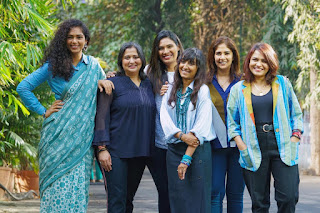 For a production house where two-thirds its leadership is female, EMMAY Entertainment has taken the gender mandate further. Founded in partnership with filmmaker Nikkhil Advani, producers Madhu Bhojwani and Monisha Advani realised that in its ninth year, the company’s body of work has reflected agnostic genres from real life thrillers like Batla House, DDay, Airlift to mass dramas like Satyameva Jayate and Marjaavaan. Conscious of dialling up the volume on content that represents women in a stronger, positive and empowered manner, they realised the answer was not just in the story; for that, they needed the right storytellers. The company has proudly signed four strong women directors with diverse film grammar and yet an aligned agenda - INCLUSIVITY. These filmmakers include Kaashvie Nair (whose upcoming film starring Neena Gupta, Arjun Kapoor & Rakul Preet), Madhumita (critically acclaimed director of the award winning Tamil feature film KD), Mitakshara Kumar (directing a period epic for an international OTT) and Ananya Banerjee (debuting with two web series this year).
Speaking on behalf of the company, producer Monisha Advani says, “We are committed to producing for a growing number of women directors. This is not a diversity card. We believe their optics change the way we view any genre of cinema, be it action, drama or comedy.”
Talking about her love for storytelling, Ananya Banerjee says, “I’ll go anywhere for a good story and this love has often led me to some extraordinary situations, bizarre encounters, odd characters (and some trouble too). All of which is slowly finding its way into my storytelling, my visuals and my technique. I’m so grateful that I’m being able to tell those stories now, in my own voice.
“When I came in 2007, I realised there were very few female filmmakers. Today, there so many more voices which is fantastic. Because, I think the gender shouldn’t matter.”, asserts Madhumita.
While sharing her association with Emmay, Kaashvie Nair says, ”Emmay is home to me. It’s been a journey of almost ten years where he has been my mentor, guide, philosopher and inspiration. Madhu and Monisha are the two pillars that hold everything together for us and always make sure that they nurture each of us, together they make sure they push our boundaries and help us achieve the best.
“I am their latest child! I say this because that’s exactly how they treat each of their directors, with love and warmth. I can never express my gratitude to Nikkhil, Monisha or Madhu enough for the trust they’ve shown in me and the support they give me. I just hope it is a very long and a happy association that goes beyond this one project to many, many more. Emmay is family to me.”, adds Mitakshara.
By Santosh Sahu
Share to: