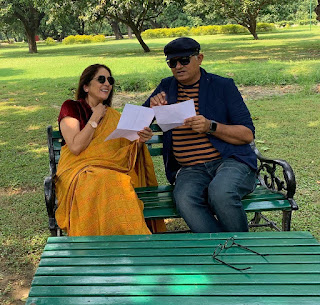 Director Hiten Kewalya’s much awaited family entertainer Shubh Mangal Zyada Saavdhan has got movie buffs hooked to the updates of the film. The stellar cast of the film was announced in a unique animated way which got viral on social media. Be it glimpses from the sets to the wrapping of Varanasi schedule, the team has been giving regular updates on social media about their journey. Ayushmann Khurrana in the lead role, along with Gajraj Rao, Neena Gupta and Jeetendra Kumar.
To celebrate the spirit & spread happiness on the sets, Gajraj Rao and Neena Gupta, decided to become Santa Claus for the entire cast of the film and distributed gifts among the team.
While Gajraj gave various kinds of goodies to the team, Neena gifted beautiful earrings to female cast and crew of the team. The entire team was left surprised and joyous.
Talking about this, Gajraj Rao said, “Shooting for the film was a beautiful experience and we all became one big happy family. So, why not celebrate special occasions it with everyone? We are all very close to each other and it was just a gesture to make everyone smile.
Adding to this, Neena Gupta says, “Everyone is very close to each other and we have spent so much time with each other that festivals feel incomplete without the cast of the film. It's all about spreading cheer and we hope this leaves everyone with sweet memories.
The Ayushmann Khurrana starrer is a family entertainer that talks about love, relationships, and homosexuality. Jointly produced by Bhushan Kumar’s T-Series and Aanand L Rai’s Colour Yellow Production, the film is a family entertainer, which talks about love. Directed by Hitesh Kewalya, the film will release on February 21.
By Santosh Sahu
Share to: