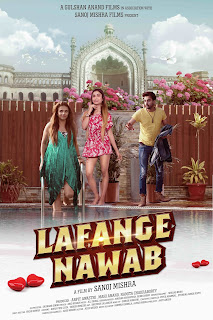 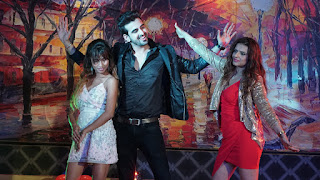 Mumbai, 11th Nov, 2019: Sanoj Mishra directed murder mystery film Lafange Nawaab music has been a big hit and loved by the audience. Now the film is all set to release this Friday on 15th November, 2019.
The leads of the film are Robin Sohi, Ritam Bhardwaj, Larissa Chakz & the film is directed by Sanoj Mishra & produced by Arpit Awasthi and Mahi Anand under the banner of Gulshan Anand Films.
Lafange Nawaab is a murder mystery which depicts the father-son’s relationship and the truth of fake friendship. The story revolves around Yug and his father. Yug has a musical band with his 4-5 friends and they do small gigs which his father never liked and wanted his son to join him in his business. To teach Yug a lesson, his father plans a fake murder of Ammie who lives at their house and impose Yug to help. In the process of faking the murder, Ammie got killed in real. Who has murdered Ammie? The story is a mystery which will be revealed only after the film release.
The singer Shahid Malya made the event delightful with their presence. The music of the movie is released by Zee music company.
Producer of the film Mahi Anand said, "Lafange Nawaab, is complete dose of Bollywood style suspense, thrill and mystery. We have three amazing songs which are composed by Ali Faishal ..danish ali and song by Palak Muchhal, Ali Faishal,danish ali . Shahid Maliya, Shivang Mathur and Altmash Faridi."puspendra singh .deepak sharma.
Director of the Lafange Nawaab film Sanoj Mishra said, "Film is a suspense thriller and the murder mystery is very captivating and interesting. Music of the film is our biggest strength. Film has been made with lots of passion and hard work. I am sure people are going to love it"
Lafange Nawaab is a suspense drama film shot at beautiful locations of Lucknow and Mumbai. Robin Sohi, Ritam Bhardwaj Larisa Chakza, Ratan Ratour, Manoj Bakshi and Ravi sudha chaudhary .purnima Nisha Shrivastav will be seen in the lead roles in the film. The movie is all set to hit cinema on 15th November, 2019.
By Santosh Sahu
Share to: