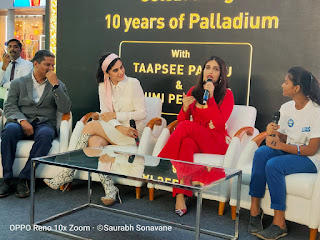 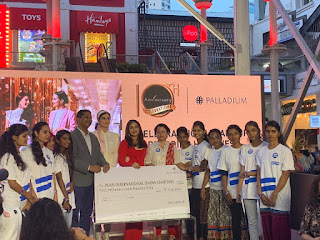 Actors Taapsee Pannu and Bhumi Pednekar have always been vocal about social issues and the need to make society better. Their much anticipated film Saand Ki Aankh is inspired by lives of India’s oldest sharpshooters Prakashi and Chandro Tomar, who broke stereotypes by building a career post the age of 60. Interestingly, they decided to practice sharpshooting to encourage their daughters to do it and get a government job with sports quota.
Now, Taapsee and Bhumi have joined hands with NGO Plan India.  Plan India has joined hand with Palladium Mall, Mumbai and Saand Ki Aankh team to promote Girl Child.
Plan India has been the NGO which with strategic partnership with UN got the date 11th October registered as the International Day for the Girl Child.  As per the association between Plan India and Palladium, one day’s earnings of the mall will be given to the NGO for the cause. Plan India took a pledge with UN to encourage the cause of Girl Child empowerment.
Adding their bit to the cause, Taapee and Bhumi will also take a pledge for the cause. They will be attend the event and interact with the Plan India NGO children and get photo ops done. They will also handover the cheque to the NGO.
Taapsee says, “I am very happy to be associated with such a great cause. Empowering girl child, educating them and making them independent, is something which we really need to do right now.”
Adding to this Bhumi says, “Saand Ki Aankh is also about empowering girls and women.  I am glad that we can be part of something which stands for positivity and growth.”
Releasing this Diwali on October 25, Saand Ki Aankh is an inspirational journey of India’s oldest sharpshooters, Prakashi Tomar and Chandro Tomar. Presented by Reliance Entertainment & Anurag Kashyap, a Chalk And Cheese Production, the film is directed by the acclaimed scriptwriter, Tushar Hiranandani and stars Taapsee Pannu & Bhumi Pednekar in the lead roles. The drama is produced by Reliance Entertainment, Anurag Kashyap and Nidhi Parmar.
By Santosh Sahu
Share to: