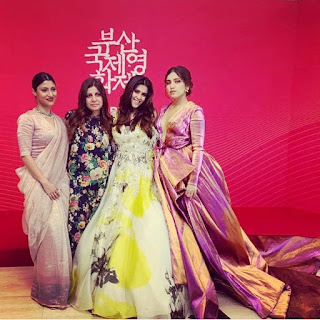 The REBElution has begun in full stride as Dolly Kitty Aur Woh Chamakte Sitare received a roaring response at its world premiere at the Busan International Film Festival. Produced by Ekta Kapoor and directed by Alankrita Shrivastava, the film tells the tale of two rebellious and transgressive women who seek to fulfil their desires and claim their independence amidst the moral ambiguity and  darkness of the city.
Ever since the first look of the film came out, it has intrigued audiences.
For one, it marks the second collaboration of creative forces, Ekta and Alankrita, who have reunited after their massively successful film- Lipstick Under My Burkha. Secondly, the titular characters Dolly and Kitty are essayed by talented actresses Konkana Sensharma and Bhumi Pednekar who have both proved their acting prowess consistently.
In the context of South Asian cinema just about beginning to give women their due, Dolly Kitty Aur Woh Chamakte Sitare is a coming of age story of two fiesty women wanting to live freely, on their own terms in a newly developing city. The World Premiere of the film has just taken place at the Busan International Film Festival and the film comes shining through the applause and love received at its first screening.
Excited with such a positive response towards the film, Alankrita says, "It's been an incredible experience to premiere the film at Busan! It's so encouraging to see people across the globe connect with the story and lives of women from India. I am honoured to have showcased the film to such a diverse, multi cultural cinema-loving audience and to receive such a warm and overwhelming response.
By Santosh Sahu
Share to: