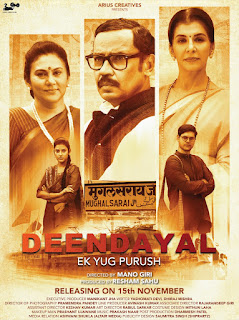 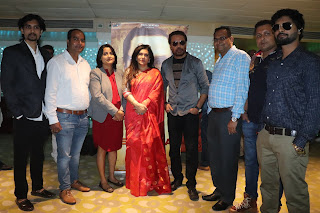 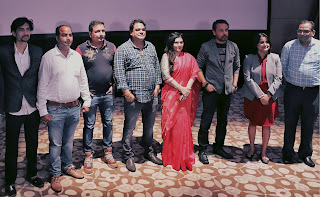 Mumbai : Today is the birthday of Pandit Deendayal Upadhyay Ji and today the trailer of his biopic movie 'Deendayal-Ek Yugpurush' was launched in a grand style at Hotel Sahara Star at Mumbai. The grand event will see the stars of the film - Imran Hasnee, Deepika Chikhlia, Anita Raj, Nikkhil Pitaley and producer Resham Sahu, writer Dhiraj Mishra, director Manoj Giri and associate director Keshav Kumar and all the people associated with the film.
'Deendayal - Ek Yugpurush' is a poignant tale based on Pandit Deendayal Upadhyay, a great leader of India, reflecting his life and his unwavering love and passion for the country.
The film has been shot in various locations at Allahabad (Uttar Pradesh) such as Anglo-Bengali College, Naini, Jhansi and Mumbai under the banner of Arius Creatives.
'Deendayal-Ek Yugpurush' has been produced under the banner of Arius Creatives, directed by Manoj Giri and the associate director of the film is Keshav Kumar, the film's writers and designers are Dhiraj Mishra and Yashomati Devi. The producer of this film is Resham Sahu and Manikant Jha has taken the responsibility of being the executive producer of this film.
Anita Raj, a famous actress of her time, is making a comeback on the big screen through this film. Actress Deepika Chikhlia will also be seen in the lead role. Apart from these, Anil Rastogi, Imran Hasnee, Balinder Singh, Prashant Rai, Nikhil Pitale, Shipra Rastogi, Rajeev Mishra, Abhay Shukla, Shyam Sharma, Virender Mishra, Soham Maity, Deepika Verma, Ranjit Jha, Tanzeem Alam, Adisha Upadhyay and Anita Sehgal will be seen in prominent roles. The line producer of this film is Avinash Kumar.
The seeds of the establishment of the Bharatiya Janata Party began to sprout soon after Pandit Deendayal Upadhyay. He was the co-founder of the Bharatiya Jan Sangh. Deendayal Upadhyay was quite active socially, and later he took a unique example of his sacrifice and struggled while participating in the freedom struggle of India.
However, at the trailer launch of the film, producer Resham Sahu said, "The film 'Deendayal Ek Yugpurush' will bring today's youth back to life with the life of Pandit Deendayal. In this film, Pandit Deendayal's struggle for freedom amidst adverse circumstances, has been shown well and for this, what better day than today, when today is Pandit Deendayal Ji's birthday we are launching the trailer of this film.
By Santosh Sahu
Share to: