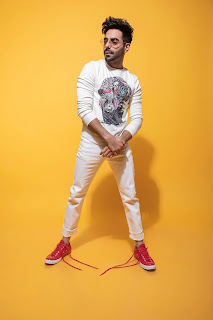 This year has surely began on a good note for Aparshakti Khurrana after receiving rave reviews for his  successful single Kudiye Ni & for his movie Luka Chuppi, the actor is has now been signed to play an important role in Mudassar Aziz’s Pati, Patni Aur Woh.
The young actor who is known to play an array of roles has emerged has the new Mr. Dependable in the past few months. Right from Dangal to Lukka Chuppi the actor’s portrayal has always managed to win hearts of critics & audiences alike with his performances. When asked Apar, about him being a part of this project, here’s what he had to say, “It’s amazing to join hands with Bhushan Ji one more time, that too with Juno. After Luka Chupi, Kartik and I are quite compatible he jokes so you will see the chemistry going between us in this one too. The two pretty girls Bhumi and Ananya make the team warmer, I totally love what they are doing in front of the camera and the captain of the ship, Mudassar is leading with full conviction.”
Interestingly the actor has always played a varied streak of roles & with this he is certainly going to attempt something that is completely in his element yet in a different way. Right from an RJ to now an actor, Khurana has always excelled in whatever he has done.
With the utter simplicity & a strong Screen presence, this role is going to be another cakewalk for Aparshakti.