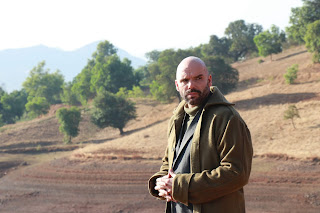 American actor Zachary (Zack) Coffin who balances between Los Angeles and Mumbai plays the baddie in Hawa Badle Hassu. Zack is seen pitted against the eco friendly auto rickshaw driver, titular-Hassu played by Chandan Roy Sanyal. Zack plays a suave & suit clad mysterious character who trails Hassu and tries to trap him. Zack who has lived, worked and travelled in about 35 countries is at ease while working in Bollywood. Talking about his work in Bollywood and his role in Hawa Badle Hassu, the actor said, “I studied acting in New York but Mumbai is home now -- I've been here about 10 years. You can take me out of Mumbai but can’t take Mumbai out of me. I started in theatre with Neeraj Kabi and Akharsh Khurana, performing at Prithvi and NCPA, and have had the pleasure of touring the country doing plays. My first big Hindi serial show was as the main villain in Maha Kumbh, and Mary Kom was my first Hindi film. Since then, I've acted in over 50 shows and movies, and more recently, a variety of web series. I love web series for their experimentation and freedom. This web series -- Hawa Badle Hassu -- is crazy different, and I love it. I can’t reveal much but I play a kind of character that I've never seen in Indian entertainment. Actually, the whole series is like this -- totally different. You've got a new, hybrid genre -- thriller and sci-fi -- with the environment as the central theme. I think audiences will find it very fresh. I'm actually very glad to be part of it, and have high expectations for future seasons!” Zack was first seen on Indian cinema as a boxing coach in Mary and there has been no looking back. His filmography boasts of big budget mainstream Bollyood titles like Baby, Tiger Zinda Hai, Judwa 2, Simran, Housefull 3 and Parmanu:Story of Pokhran among others. In the ott space also the actor has firmed his presence with Made In Heaven and Inside Edge.
Hawa Badle Hassu is his upcoming release. Hawa Badle Hassu is an environmental SciFi thriller which starts as a slice of life story and expands into a full fledged sci fi drama. It is directed by Saptaraj-Siva, Co- Written by Protiqe Mojoomdar and produced by Handyyman. The series is slated to launch soon on Sony Liv.
By Santosh Sahu
Share to: