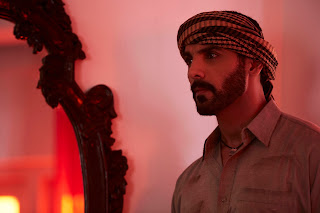 John Abraham’s much anticipated RAW (Romeo Akbar Walter) is a cinematic tribute to those men and women who operate beyond enemy lines in times of peace and war and often remain unrecognised. The actor who plays a spy, not just masks his looks but also his identities for protecting the nation. Rehmatulla Ali aka Romeo turned Akbar Malik goes undercover and befriends one of the biggest arms dealers of the neighbouring country.
Allah Hoo Allah, the song that was launched TODAY, leaves the audiences at a cliffhanger; with Akbar and his motives being exposed. Writer-director Robbie Grewal explains the song’s relevance. “Qawwali is an interesting form of music to create the old-world vibe of early 70s. Qawwalis were often part of social gatherings and functions during this period. But this one is like a scene for our film, where lead characters are conversing within it. It’s suitable treatment for the song to take forward the film’s story.”

Trying out an innovative form of filming a song, Robbie has shot this Qawwali in lip sync, with dialogues interspersed. That will make this song for interesting viewing.
Written & directed by Robbie Grewal, RAW, is an espionage thriller set in the dynamic period of 1971. The film stars John Abraham, Mouni Roy, Jackie Shroff, Sikandar Kher, Suchitra Krishnamoorthi and Raghubir Yadav.
Set in the tumultuous period of 1971, RAW is based on true events which had an impact on the future of three countries- India, Pakistan and Bangladesh. It was a period, which saw the subcontinent’s most decisive battle marking the birth of Bangladesh. In just 13 days the Pakistan army surrender unconditionally to the Indian army, making the 1971 war one of the shortest in history. India’s intelligence agencies, especially RAW, played a very crucial part in this conflict, which made every Indian action precise, impactful and deadly.
With its interesting historical premise, RAW (Romeo Akbar Walter) promises to be a must watch this 5th April.

About the film:
Written & Directed by Robbie Grewal, the espionage thriller is a salute to those who serve the nation behind enemy lines and yet remain nameless, faceless and are often forgotten.

John Abraham essays the role of a RAW agent who chooses to serve his country and sacrifices everything he has, even his very existence. The film also has a stellar ensemble star cast with Jackie Shroff, Mouni Roy, Suchitra Krishnamoorthi and Sikander Kherr & Raghubir Yadav in pivotal roles.
By Santosh Sahu
Share to: