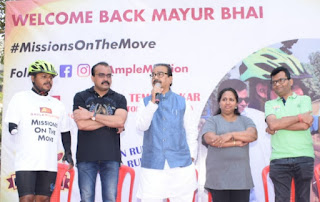 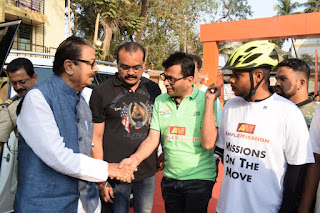 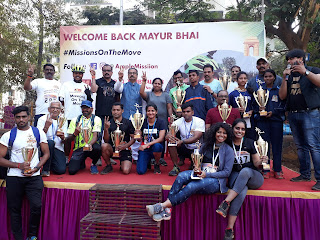 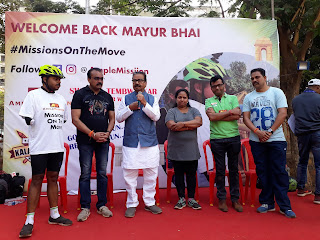 Mayur Dumasia is an Ampute and an inspiring Cyclists on a Mission, who pedalled from Delhi to Mumbai for awareness of multiple Social Issues. His journey was across 5 Indian states, over 1500 kms and in a span of 15 days to reach his final destination, Mumbai.
This is Mayur’s maiden long distance Cycling ride ever and this is appropriately named #MissionsOnTheMove an unique initiative by Mumbai based social organisation Ample Missiion - the force behind this record breaking attempt –‘Longest Cycling Ride’ ever by any amputee!!
The Cyclists Mayur was flagged of from India Gate Delhi on 11th January, 2019 by Cabinet Minister for Social Justice and Empowerment Shri THAWAR CHAND GEHLOT JI in the presence of Founder Ample Missiion Dr Aneel Kashi Murarka and many dignitaries. Mayur highlight the issue of ‘Women Saftey’ in Delhi, where women activists and girl students were present to cheer him up as he embarked on a foggy winter morning from Delhi, enroute he crossed the cold desert of Rajasthan to undulating Rocky Mountains and unending highways. He was greeted by enthusiasts and people at different cities & villages falling on way for the different causes.
The main objective of this cycle expedition is to spreading awareness of various causes that plague our society, the cyclist’s journey will be interspersed with pit stops at Bawal, Khelana, Jaipur, Bagru, Ajmer, Raipur, Keerwa, Pindwara, Siddhpur, Prantij, Nadiad, Snasrod, Surat, Vapi, Palghar and to conclude on the eve of Republic Day morning on 26th January, 2019 at Gateway of India, Mumbai. And on 27th morning he was  Felicitated in mumbai by DrAneel Kashi Muraraka, Siddhant Murarka along with Mp Gajanan Kirtikar, Corporator Swapnil Tembwalkar and ex corporator Varsha Tembwalkar at Goregaon Pandurang Ground on the occassion of Republic Run Goregaon Marathon.
The following list of issues were effectively highlighted by him amongst the locals through speech, demonstration, interesting activity and people participation to achieve the desired change in the society. The issue include Women Safety, No to Drugs, Oral Cancer awareness , Sports, Save Water, Army Day, Potholes, Child Marriage, Hygiene, Environment, Martyrs, Road Safety, Disability Rights, Education, Girl Child, Farmer’s Suicide and Republic Day.
By Santosh Sahu
Share to: