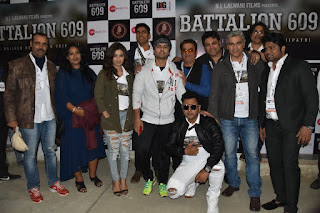 For the first time in the history of Indian Cinema, ‘Battalion 609’ the upcoming film’s music was launched on the cricket field. This unique event took place during the break of an ongoing cricket match being played by filmy celebrities at Ekana Stadium in Lucknow in presence of its complete cast, supported by the cricketers amidst loud cheers from the spectators.
No wonder, it is widely believed that cricket and films is the only combination that is the favorite amongst the Indians.
A thrilling film, ‘Battalion 609’ touches the subject of the past 4 wars between India and Pakistan. It has a unique subject that also deals with the future relationship with our neighboring country. The story is about how the Indian and Pakistani soldiers on the battlefield across the borders, skillfully handle the tense situation that is unknown to their respective head commands.
Written and directed by Brijesh Batuknath Tripathi, the film ‘Battalion 609 is produced by Naraindas Lalwani. Music is composed by Shailendra Sayanti. Singer raja sagoo The leading roles in the film are played by Shoaib Ibrahim (Big Boss famed Dipika Ibrahim’s husband) and Elena Kazan, supported by Farnaaz Shetty, Vishwas Kini, Vicky Ahuja and Vikas Srivastava.
Film ‘Battalion 609’ is set for a worldwide theatrical release by Big Curtains Media on 11th January 2019.