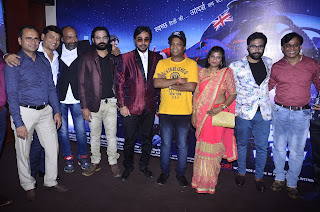 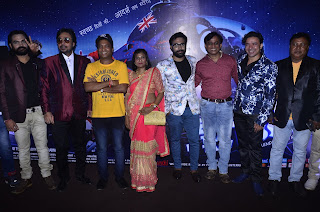 Trailer of Film "English Ki Taay Taay Fisss", was launched at The View in Andheri. Music dIrector Dilip Sen, Manse leader Abhijeet Rane, corporator Raju Pednekar, Sunil Pal and entire production team along with artist and media were present on the occasion. Everyone praised the theme of the film and gave there well wishes to the maker's.
Film "English Ki Taay Taay Fisss" is a hilarious but with social message is made under the banner of 'Siddhika Cine Craft', and produced by Sanjeet Kumar Thakur & Shiv Prasad Sharma, Co-produced by Manoj Khandelwal and directed by Shailendrasingh Rajput. Film introduces Rohit Kumar with N Leysan Karimova from Russia, with support of Rajpal Yadav, Manoj Joshi, Govind Namdev, Mushtaq Khan, Viju Khote and Sunil Pal.
Film's story is on background of a village, where Sarpanch wants to make his village an ideal for everyone, but another person who is in illegal alcohol business, try's to ruin his dream, and wants to become sarpanch himself. Meanwhile Sarpanh's son returns from his study from foreign, he realized the situation and calls his friend, his friend arrives with his sister, and a love story is also born. How they turn their village into an ideal village and gets rid with the corrupt person, is the entire story.
By Santosh Sahu
Share to: