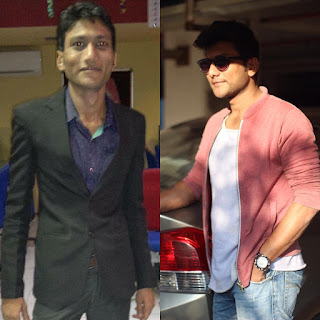 Actor and producer, Prem Kumar, has lived a life of steep climbs, daring to reach the summit on his own terms. Though he belonged to a well-to-do family, Prem broke through all walls of support to embark on a journey to achieve his dreams – and become what he earnestly longed for.
Prem’s passion for acting was kindled very early on, when he played the lead role of MaharanaPratap and Panduranga in his primary school at the tender age of five. The young boy was nervous and frantic before his initial portrayal of MaharanaPratap, but the moment he stepped foot on stage, fear was swallowed by natural charisma. The auditorium reverberated with his raw yet confident energy to crescendo with thunderous applause. The seeds were sown, and an actor was born.
He had an epiphany and left his pursuit of engineering in 2010 to step foot in Mumbai, the city of dreams, with a mere 500 rupees in his pocket. He was unwavering and unwilling to seek any financial help from his loved ones due to a profound belief in his own abilities to carve a path for himself. Prem started his fairy tale journey from the bottom of the ladder as a security supervisor. Slowly, but steadily he inched his way up working in manufacturing company, and then in a BPO call centre for nearly five years. His capabilities were evident during his tenure where he was promoted as a team leader. His established merit paved the path to the role of Sponsorship and Delegate Manager at The Times of India. He grasped this
pivotal opportunity with both hands to connect with media personalities and celebrities opening avenues of learning and opportunity.
One thing gradually led to another and Prem soon set out to give wings to his dreams with theatre, in which premise he made an excellent mark. Apart from debuting as a model in the Lakme Fashion Week in Mumbai, Prem aced his role in Greed, a short film in 2017.
Once again, at the young age of 26, he gave up the opportunities at The Times of India to seek greener pastures. He almost instantly kick-started his production house Prem Kumar Films to come up with his first movie Lateef to Laden. Prem and his entire crew worked round the clock for 23 days, bringing to life the characters and scripts in the movie. It is set to release on the 26 th of October 2018 but is already receiving wide acclaim for the zealous and creative work of those involved.
“I believe that one thing that you have and nobody else has is YOU! Your voice, Your dream, Your Mind, Your Story, Your Vision. Write and draw and live as only You Can! My Story, I feel like it’s amazing, because it shows people, no matter where you come from, No matter what your life style is, your dreams would still come true if you believe in yourself and push hard to do what you want to do.” Says Prem Kumar
Deeming Prem Kumar’s journey as a challenge or a struggle would be an understatement. It has rather been a long-fought battle with Prem coming out as an epitome of character and perseverance. He is a man who prides on his capabilities towards the pursuit of excellence. He never gave in to the comforts that were easily at his disposal given the industry he is a part of but rather took strength from his grounded feet to differentiate himself from the world, setting examples for everyone along the way. Prem ardently believes in giving his best to everything he undertakes – small or big. His only advise to budding actors and for that matter anyone who is trying to achieve their dreams is to pursue what they earnestly love, but with honesty and integrity. The gravest mistake, he says, would be to live in a life of lies under a protected veil of ignorance.