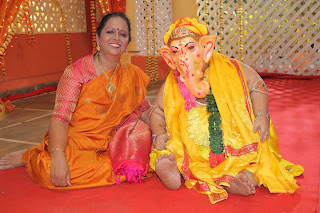 Festival time brings togetherness, celebrations and happiness. This Ganesh Chaturthi too brought in additional gleam on T-Series Bhakti Sagar in its YouTube channel.
What draws attention to this popular music channel striking gold is the release of a popular Ganesh Bhajan titled “Mukh Mera Hathi Ka Hai Kyun Meri Maiyya…” posted last year. It has garnered more than 1,113,858 views which indeed ring a blessing in disguise by Lord Ganesha to its makers too.
Full marks to Bhanu a.k.a Mrs. Parwathy Akhileswaran; the lyricist, music director and singer of this devotional number who has made her wonderful presence felt. The elated writer-singer & composer Bhanu is speechless scoring of having made this devotional music video. Speaking about her experiences, she says, “I am thankful to T-series people for providing me a wonderful platform. I have penned the lyrics and have scored and rendered it with Annuji including featuring in the videos.”
A graduate from University of Mumbai, Bhanu comes from an artistic family. She has authored a cookery book which was published by India Book House. She has also penned many educational work books which have been published by Sheth Publishing House. She has tutored herself in Carnatic and Hindustani classical music too. To begin with she has uploaded a social bhajan on her YouTube channel - Surleela.
Bhanu excitedly adds, “T-Series people have successfully released three bhajans on their YouTube channel T-Series Bhakti Sagar. In that devotional track there is one of more song as a lyricist, singer and music director “Kaun Hai Bhakt Krishna Ka” which stood second on the list and “Mukh Mera Haathi Ka” ranked eighth in the list.”
On asking about her future assignments, she pronounces that there are few announcements which are in its pre-production stages. Apart from bhajans, she is easy penning ghazals, romantic songs, quawali amongst others. She is also scripting stories, screenplays and dialogue. Having a penchant for original content and creative abilities galore, she is a talented writer to be watched for who is surely bound to go places.
By Santosh Sahu
Share to: