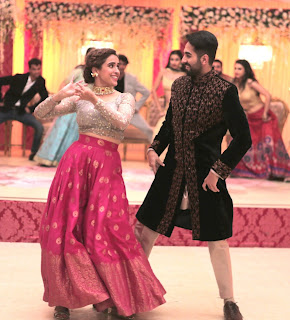 After showcasing an entertaining trailer and the first celebratory song Badhaaiyan Tenu, the makers of Badhaai Ho have launched yet another Punjabi dance number, Morni from the family comedy.
Composed by Tanishk Bagchi, sung by Neha Kakkar and Guru Randhawa, Morni which is a recreation of a Punjabi folk song, will see Sanya showcasing her dancing skills for the first time on the big screen.
Composer Tanishk Bagchi says,Morni is a very special song to me. The word Morni is a very Nostalgic word in Punjab, and its sounds too sweet as well. The entire song is rearranged, in a completely new urban feel and vibe. Comparing the old version, only the hook of the song remains, Rest everything about the song is New and Fresh! I have put in my best to recreate this magical song! Morni has my twists and feel to it. Hoping everyone loves it.
The talented actress, who is a trained dancer and often appreciated for her dancing skills by her fans on the social networking sites, will be seen performing an energetic dance number alongside Ayushmann, touted as the party anthem for the festive season.
Sanya says,"It’s feel amazing! I was literally dying to dance in a film. I'm a huge Guru Randhawa and Neha Kakkar fan and I can't believe that my first dance song is sung by them. Morni is such a fun song and I'm sure it's going to be next big thing for parties."
Junglee Pictures presents Badhaai Ho in association with Chrome Pictures. Produced by Vineet Jain, Aleya Sen, Hemant Bhandari and Amit Ravindernath Sharma, the film is co-produced by Priti Shahani. The film releases 19th October 2018.
By Santosh Sahu
Share to: