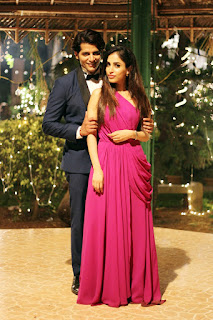 Karanvir Bohra wraps up his first feature film, 'Hume Tumse Pyaar Kitna, yesterday in Madh Island This is his first Hindi film under his production company, Bora Bora Entertainment. It is made in association with Tseries. The film is directed by Lalit Mohan. Starring Karanvir Bohra and Priya Banerjee play the leads roles along with Samir Kochar and Mahesh Balraj. The crew shot for a song on the last day of the shoot.

Karanvir Bohra said, ‘The film is like a baby for us because it had been with us since the inception stage, not only from the story or even idea but from the germ that we need to make a film. Today, it is unbelievable that the filming is over and we are on post the post-production stage.
The director and the team have the equal amount of passion and fire towards their work and it shows in the film with its production value and grandeur which had been captured by the Ace Cinematographer Santosh Thundiyal.
We also have a beautiful ensemble choice of music composers, Jeet Ganguly, Raaj Aasho, Tony Kakkar and Toshi Sharib the lyrics are penned by Shabbir Ahmed.
T-series has given a great choice of also of singers for my movie, Guru Randhawa, Kanika Kapur, Armaan Malik, Shreya Ghosal, Tony Kakkar, Ali Azmat,
Slated to release this year... the date will be announced soon.
By Santosh Sahu
Share to: