0 March 28, 2018
A+ A-
Print Email
Please don't blame me, says actor Rajpal Yadav to Shrashti Maheshwari.
(Shrashti Maheshwari recollects an incident from the shoot, accounting Rajpal Yadav liable for the same)
Shaadi Teri Bajayenge Hum Band is an upcoming movie directed by Mr. Gurpreet Sondh with the star cast of Shrashti Maheshwari, Rajpal Yadav, Mushtaq Khan, Rahul Bagga, Rohit Kumar, Dilbagh Singh, Naresh Gosain, Afreen Alvi and Radha Bhatt. Recently the cast & the team were seen together during the Song launch of the movie, where they revealed some fun moments that they recollect from the shoot.
One such incident was when the shot was supposed to be taken with Rajpal Yadav & Shrashti Maheshwari in the frame, wherein she had to go inside the washroom and walk out again. However, someone had tied the latch until then and she was locked while trying to give the take. She kept on asking the outsiders to open the door, and when she was out she saw Rajpal Yadav and crew laughing on the same, says Shrashti Maheshwari. Though Rajpal Yadav was clueless about the same & denied being the mind behind the prank and till today the prankster is still a mystery. 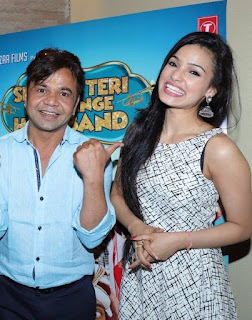 ''We were in the middle of the shot, I started laughing really hard. I was not sure what was going on, she walked outside and looked at me & thought that I was the one to lock her up. And here I was sitting cluelessly about the entire matter'' Says Rajpal Yadav about the incident.
By Santosh Sahu
Share to: