0 March 28, 2018
A+ A-
Print Email
Abhay Deol makes a memorable entry at the trailer launch of Nanu Ki Jaanu

Abhay Deol is back with yet another interesting film ‘Nanu ki Jaanu’, a horror comedy directed by Faraz Haider and written by Manu Rishi Chaddha.

The trailer of the movie was recently unveiled amidst the media and trade persons who couldn’t stop themselves from applauding as it had an edgy narration which kept them glued to the seats.

Abhay Deol made a magical and astonishing entry at the event in a car with an invisible driver. The stunt got a great response from everyone present on the occasion, leaving them thunderstruck! Also present at the event were Patralekhaa, Director Faraz Haider and producer Sajid Qureshi.

All in all, it was a quite a lively and memorable event!

The poster and teaser of the film were released last week and it received a lot of love and appreciation for the audience.

Presented by Inbox Pictures Pvt Ltd, produced by Sajid Qureshi, Nanu Ki Jaanu is directed by Faraz Haider and is slated for a 20th April release. 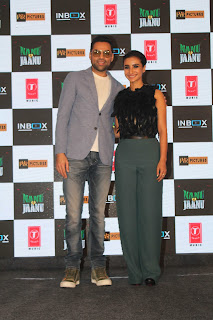