' Terror Strike beyond Boundries ' dedicated to Army and Nation

Most of the filmmakers make films just for entertainment purpose, but some of them make film to influence and aware audience. The most important thought is that the youngsters should follow traditional values instead of practicing the western culture.
Producer Manoj Pandey who is a nationalist and has a positive thinking about the nation has made a film named 'Terror Strike Beyond Boundaries'.This film's background is Indian Army who is always vigilant on the border and in this film audience will be shown what problems army face, what is their mental condition and their love for country even in such conditions.They are always ready to fight against terrorists but pressure from higher authorities and politics makes them helpless.
According to Manoj Pandey, films have become a mirror of society and through this medium a message can be sent for social development and better lifestyle.
This film is awarded in national and international Film Festivals which is written and directed by Kamal Nathani. This film is shot in LOC Kashmir, Manali.
Rajat Bedi, Mukesh Tiwari, Zakir Hussain, Manish Waghwa and new comer Taniya Purohit will be shown in lead role.
The film under the banner Dreamcity Entertainment Pvt Ltd is releasing on  19th January.
Filmmaker Manoj Pandey is from Jharia Dhanbad, Jharkhand State. He is interested in creative work, writing and journalism is his passion.He has spend most of his life time in Delhi and Jaipur because of which he understands the situation of nation extremely well.
After this film, he will immediately be working on his next movie ' IPS Mahli ' in which hardcore problems of Jharkhand State will be shown. 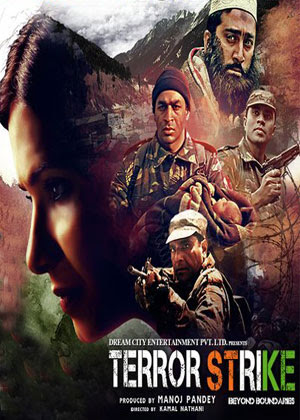