The very versatile actor Saif Ali Khan has spent 25 years in Bollywood entertaining his audiences with some of his best films like Dil Chahta Hai, Salaam Namaste, Omkara, Being Cyrus, etc is set to mark his 60th film with Kaalakaandi.
2.  Deepak Dobriyal Turned Hariyanvi tutor for his co-stars
While shooting for the song “Swagpur ka Choudhary” a break beat meets funk rock track with Haryanvi lyrics, the actors found the song difficult to connect with and were not able to bring out the essence of it. That’s when Deepak Dobriyal, who plays a gangster in the film, came to their rescue and explained the meaning and the feel of the song post which the actors could easily slip into the mood.
3. Neil gets inspired by Amitabh Bachchan for his character in Kaalakaandi
Neil Bhoopalam will be seen playing the role of an underworld don and a sharp shooter in Kaalakaandi. His look in the film resonates the 80’s sense of style with long side locks, bellbottoms and tight shirts. The actor took Amitabh Bachchan as his character reference. He watched a lot of Amitabh Bachchan movies and tried copying his stance.
4. Saif Ali Khan turns choreographer for Kaala Doriya
Saif Ali Khan is known for his versatility and portraying different characters and he is one actor who has never shied away from experimentation. The actor turned choreographed for the wedding song Kaala Doreya in the film. He has earlier choreographed a few songs which has become cool steps to follow like Dil Chahta Hai’s famous ‘Who Ladki Hai Kahan’.
5. Nary Singh’s Fan Girl moment!
Nary Singh who is one of the most talked about characters in Kaalakaandi had her fan girl moment. Nari Singh shares screen space with Saif Ali Khan and plays a very pivotal role in his part of the story. Nary was absolutely awestruck and extremely nervous while enacting her scenes with him. When director Akshat Verma highlighted this to Saif, he took the time to help her ease out and make her comfortable. 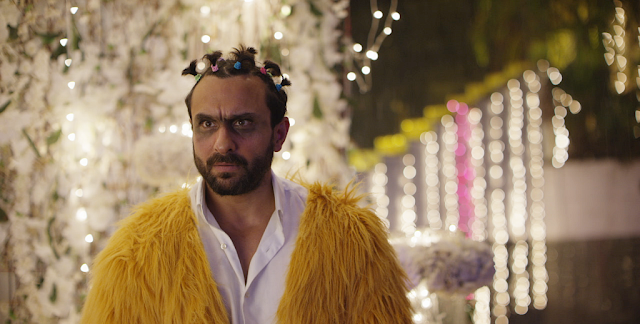