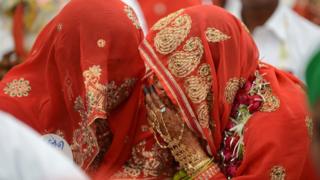 Husbands who attempt "instant divorce" could be sentenced to three years in prison under draft legislation being considered in India.
The traditional practice involves a Muslim man saying "talaq" (divorce) three times - in any form, including email or text message.
It was declared unconstitutional by India's Supreme Court in August, but officials say it has continued since.
The proposed law also provides for fines and support for affected women.
The draft Muslim Women Protection of Rights on Marriage Bill has now been sent to regional governments for consultation.
It would explicitly ban "triple talaq", in line with the Supreme Court ruling, and lay out procedures legal procedures for a "subsistence allowance" and custody arrangements, the Press Trust of India said.
Those provisions have been made "to ensure that in case the husband asks the wife to leave the house she should have legal protection," it quoted a high-level official as saying.
Under the current draft, people suspected of the offence would not be eligible for bail.
Indian news outlets said the legislation is due to be considered during the winter parliamentary sessions, which begins in mid-December.
Muslims are India's largest minority group, and it is one of a few countries where the practice of triple talaq - which has no basis in the Koran - has survived.
The Supreme Court ruling came after five women petitions the court, arguing the traditional practice violated their fundamental rights.
The court ruled 3-2 in their favour, and labelled it "un-Islamic".
By Mission Patrakarita
Share to: