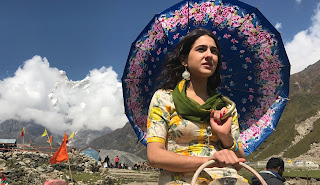 2.  PARMANU– THE STORY OF POKHRAN - Release date: 23rd February, 2018:
An edge-of-the-seat thriller that will make every Indian proud- a true India Shining story!
Parmanu- The Story of Pokhran, is an ode to the Indian army and scientists, who although ordinary people, truly accomplished extraordinary feats in the face of adversity. The film salutes, celebrates and truly embraces the slogan- Jai Jawan Jai Vigyan.  Directed by Abhishek Sharma, the film stars John Abraham, Diana Penty and Boman Irani. While the premise of the film is based on true events, the characters are fictitious.
Starring: John Abraham, Diana Penty and Boman Irani.
Directed by: Abhishek Sharma

3. OCTOBER - Release date: 13th April, 2018:
A slice of life love story directed by Shoojit Sircar and written by Juhi Chaturvedi, October will star Varun Dhawan and newbie Banita Sandhu in the lead. The film is produced by Shoojit's partner at Rising Sun Films- Ronnie Lahiri.
With a repertoire of films like Yahaan, Vicky Donor, Madras Cafe, Piku and Pink that have explored different genres and have won accolades including National Awards, Rising Sun Films' new venture, October, will be a story about love. “It is a genre that I have always wanted to delve in. While love and romance have been entwined with Indian cinema, there is abundance in that emotion that everyone can have their own interpretations of. Juhi and I have always tried to create stories from the reflections of real life moments that we see around us. October is another effort to explore those moments out of simple situations of life,” shared Shoojit in an earlier statement.
Starring: Varun Dhawan, Banita Sandhu (Debut)
Directed by: Shoojit Sircar

5.  KEDARNATH - Release date: 21st December 2018:
A much-awaited film that marks the debut of the charming and talented Sara Ali Khan opposite Sushant Singh Rajput. Directed by acclaimed filmmaker, Abhishek Kapoor (fondly called Gattu), Kedarnath, is a love story set in the holy temple town of Kedarnath and has been shot at some of the most beautiful and untouched locations in the Kedarnath area like theTriyuginarayan Temple or the Akhand Dhuni Temple, held in reverence for the belief that Lord Shiva married Parvati here. The shoot also explored the virgin Chopta forests, an unspoiled natural destination lying in the lap of the Uttarakhand Himalayas that offers views of the imposing Himalayan range including Trishul, Nanda Devi and Chaukhamba.
Starring: Sushant Singh Rajput, Sara Ali Khan (Debut)
Directed by: Abhishek Kapoor

6.  PHOTOGRAPH - Release date: TBC 2018
Set in Mumbai, Photograph is a love story of sorts between a poor photographer and his muse. Directed by Ritesh Batra, the film will have an ensemble cast with Nawazuddin Siddiqui and Sanya Malhotra in the lead. This will be Ritesh's fourth film after - The Lunchbox (2013), The Sense of an Ending (2016) and Our Souls at Night (2017).
Starring: Nawazuddin Siddiqui, Sanya Malhotra
Directed by: Ritesh Batra
Producers: Amazon Studios, Poetic License Motion Pictures