Ishaan Khatter and Ananya Panday starrer 'Khaali Peeli' wins big; trade analysts call it one of the most watched mainstream films amidst lockdown 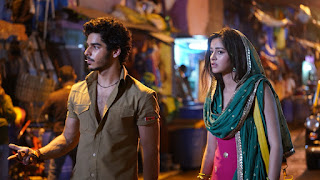 Mumbai, Ishaan Khatter and Ananya Panday starrer Khaali Peeli has become a trendsetter in more ways than one. The masala entertainer managed to create the right buzz much before the release through its strategically planned and smart PR campaign. It was soon after it's big announcement, Khaali Peeli became one of the most highly anticipated films of 2020. Interestingly, the commerical potboiler is Bollywood's first ever film to have a multi-format release.

Khaali Peeli, which had a digital premiere and global theatrical release in selected cities on October 2, opened to great reviews. Right from the mainstream critics to the entertainment press and the commercial audiences, they all seem to have absolutely loved the film and given it a big thumbs up. Needless to say, it has emerged as one of the biggest films of the year.

Speaking of the same, popular trade analyst Komal Nahta says, "That Khaali Peeli was made for the big screen is evident from the content. Yet, if proof was ever required, it came in the form of 6 (out of 6) housefull shows of the entertainer in the only Drive In (make-shift) cinema it was released in the country. Had the film released in normal times, there’s no doubt, it would’ve been a big winner!"

On the other hand, film critic Joginder Tuteja stated, "I guess the best part about the release of Khaali Peeli in the drive-in theatres has clarified a couple of things. Firstly, the audiences are really hungry for s film to come in and atleast have a theatrical experience. We saw how the drive-in shows were totally sold out and the response was good. Secondly, I think now this whole nepotism thing can be burried because we had got Ananya Panday and Ishaan Khatter, and there were so many accusations of nepotism. These guys have gone out there and audiences have also gone to watch what they have to offer. Even from the performance's point of view, this film is a masala film and from that aspect, both of them did pretty well. They've showed it's not just because they were born in a film family and getting the eyeballs, fact is that the audiences also liked what they had to offer. So, good thing is that A - the drive-in experience worked, B - the entire nepotism thing has gone for a toss and then lastly, the performances have been liked and we are also seeing in certain quarters. Whether we see in IMDB or elsewhere, it actually quashes that as well. The IMDB rating shows 2/10 but if you ask the real audience, it's totally different, which again shows that how screwed can this entire rating business get, when it comes to people who are actually watching the film vis-à-vis people who are likely not and are just going ahead and screwing up the ratings. So a lot of positives have come out of this. This is the first film which has actually started monetizing in some way theatrically, even though it was a minicule amount but atleast the start has been made."

For the unversed, Khaali Peeli was initially designed for a big theatrical release. High on romance, action, drama and comedy, Khaali Peeli has undoubtedly become the perfect watch to enjoy at home with loved ones in the lockdown. Packed with high-octane action sequences and the extravagant song-dance sequences, this one truly is something that cinema lovers cannot afford to miss.

According to trade pundits, Khaali Peeli would have been a major money spinner and emerged as a super-hit if it would have had a theatrical release. However, owing to the Covid-19 pandemic, the film enjoyed an impressive direct-to-OTT release. Meanwhile, at the same time, makers organised some special drive-in shows across select venues in the country. While massive love has been pouring in for the film on social media, a makeshift drive-in theatre in Gurugram ran full house on the day of it's release. The shows over the weekend have witnessed a strong advance booking and ran with 100% occupancy, with social distancing norms in place. Trade analysts have already declared Khaali Peeli as one of the most watched mainstream films in the current times.

There are no brownie points for guessing that Khaali Peeli has struck the right chord with the audiences and has emerged as a winner, through and through.