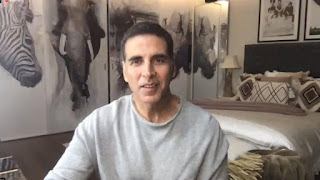 Akshay Kumar has been making sure to reach out to as many people as possible to extend his helping hand amidst the pandemic. After donating 500 wrist bands to the Nashik Police for tracking of COVID - 19 symptoms, the actor has now come forward to launch a centralised online health system to monitor the health and wellness of Nashik City Police’s personnels. The launch took place via webinar Akshay Kumar along with the Nashik Police commissioner, Vishwas Nangare Patiland the CEO of the brand, Vishal Gondal, lead the event.

Talking about the police force, the Sooryavanshi actor said, “ I am just a reel hero, the police force are the real heroes. I have more friends in the force than the industry, like Vishwas Patil sir. Through them, I understand the things that happen at the ground level. It is inspiring to hear about them and I salute them for saving so many lives on daily basis. Not just the police, but all front-line workers are great heroes.”
He also spoke about the safety measures to be followed at such trying times and urged the people to follow the guidelines shared by the government when we step out.
When asked about how it felt to shoot for a day amidst the pandemic, Akshay shared, “It was existing to face the camera after so many days, but along with that it was a different feeling. There was less crew, everyone wore masks and maintained social distance. I couldn’t hug Balki sir. Everything was so new but looks like this new is the normal now.
By Santosh Sahu
Share to: