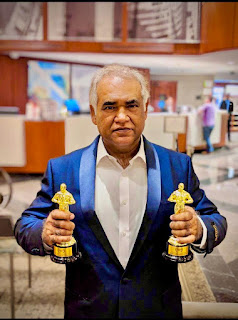 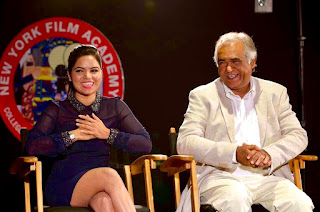 Kumar Raj's 'Tara' film once again bags Best Feature Film & Best Actress award at Filmeraa International Film Web & Music Festival May 2020
Kumar Raj, the world-famous Director and Producer added another feather to his cap amidst the lockdown this month. He received the Best feature film - Gold Award and the lead actress Rekha Rana also won the Best actress award at the Filmeraa International Film, series & music video Festival May 2020.
Filmeraa International Film Web Series & music Festival is a kind of that festival that encourages independent films & web series across the globe. They are committed to release content across the globe via exclusive screens.
Every year this festival acknowledges self-reliant work with distinctive flavor in them which can bring a change into their deliberation and also in society.
Kumar Raj was also invited to be a part of their exclusive premier league screening festival.
Kumar Raj said, "I am very happy that my feature film 'Tara' received two awards at this festival, Filmeraa is a wonderful initiative to encourage aspiring Indian film makers and a good platform to stand beside the global films. It is the most marvelous experience and the most honest event.
I want to devote this award to the great lyric writer of my movie Tara, Tanvir Kazi. He is really proficient in his work. His poem is so well known that they are recited by the legend, Amitabh Bachchan." Exclaimed Producer - Director Kumar Raj.”
Tanvir Kazi, the lyricist of movie Tara has also worked on movies like Angrezi Medium, Baaghi 3, Kaamyaab, Thappad, Guns of Banaras, Doordarshan, Cookie.
Kumar Raj is known for giving a break to a lot of new talents in Bollywood and he is proud that he identified talent & introduced Tanvir Kazi in one of his first Bollywood film, Manthan Ek Kashmakash. Tanvir Kazi is best-known for his work in the 2016 Amitabh Bachchan starrer, 'Pink'.
The feature film “Tara -the journey of love & Passion" has won more than 290 official selections and more than 190 international awards worldwide.
Kumar Raj has two more films releasing soon “Black September" & "Yahaan Ameena Bikti hai".
Kumar Raj’s Tara movie screened & awarded at Boden International Film Festival in Sweden. Kumar Raj's Tara movie screened & awarded at Boden International Film Festival in Sweden.
The spread of Covid-19 across the globe is triggering different responses across the nation and because of that everyone is quarantined at their homes but there is no lock down in Sweden and the Government has urged all the citizens to act as responsible citizens.
Recently Boden International Film Festival took place in April 2020 in Sweden and feature film Tara was screened and the film received lots of praises from both the jury as well as the audience.
Boden International Film Festival aims at showcasing the films from around the world and their main focus is to support independent movies across the world.
And the world famous and renowned Producer and Director Kumar Raj was felicitated with ‘Special Jury Award’ for his movie Tara – the journey of love and passion which also stars the international award winning actress, Rekha Rana.
When asked Kumar Raj about his movie being awarded he said “I really love when my hard work and my dedication gets appreciated by people all around the world, I just hope that my movie keeps on receiving this kind of love and appreciation forever.” World famous Director-Producer Kumar Raj has received around 190 International awards from all over the world with 282 Official selections.
Apart from being the Film Producer and Director Kumar Raj is also a Merchant Navy Captain and currently is serving the nation by being on duty 24/7 by serving at all the major and the minor ports of India.
“I feel really bad for what the country and everyone are going through because of Corona virus. I just hope that everything gets resolved soon and we can have a normal life again, I feel grateful that during this pandemic I’m able to serve the nation by being on duty 24/7 and making sure that all the essentials are served”, quoted Producer Director Kumar Raj.
Kumar Raj’s next feature film “Yahaan Ameena Bikti Hai” will be release soon…

Kumar Raj's feature film Tara selected & screened at The Festival Five Continents International Film Festival 2020 In Venezuela.
The film "Tara" which is produced & directed by Kumar Raj and stars actress Rekha Rana was recently selected & screened in the festival Five Continents International Film Festival 2020 in Bolivarian Republic of Venezuela which is a country on the northern coast of South America.
Five Continents international film festival is held in Venezuela every year where feature films, short films & web series from all over the world come together to participate. The main aim is to grant satisfaction to all the filmmakers that their work is perceived by the audience and the movie reaches a large number of people.
When asked Producer -Director Kumar Raj about the selection he said, "The Director of the festival Veruska Cuma explained to me that the audience and the jury loved my feature film Tara and it is also being nominated for the awards. My film Tara is the film which is all about women empowerment"
Tara is the feature film which has received over all around 190 awards and is being selected and appreciated worldwide always.
"I am feeling honored as Tara is the only film from India to be nominated and screened at FIOCC.
I will strike back as soon as possible with another film which is under production right now titled Yahaan Ameena Bikti Hai", exclaimed Kumar Raj.
"I am very happy as the festival has clear cut rules and even crystal-clear communication,
My best wishes to the director and the jury for the film festival",
signed off Kumar Raj.
Tara film next selected in 5th INCA Imperial international film festival on 15th May in Peru, Lima in South America.
Tara feature film produced & Directed by Kumar Raj starring Rekha Rana is selected in 5th INCA Imperial International Film Festival 2020. The event is on 14-17 May 2020 in Peru, Lima, South America.
By Santosh Sahu
Share to: