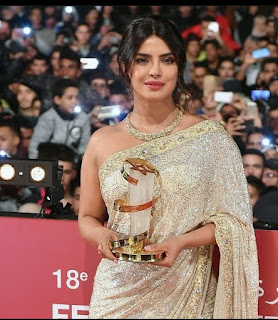 Actor Priyanka Chopra Jonas has built a strong body of work with her sheer hardwork and dedication. Not only is she hailed as one of the top actors in Bollywood, she is a very global icon on the world map as well.
Celebrating her achievements the Marrakech International Film Festival has announced a prestigious honour for the multi-talented person that she is.
A tribute has been given to Priyanka Chopra Jonas at the mythical Jamaa El Fna Square in front of the people, a special venue where no award ceremony has happened earlier.
While the film festival celebrated the Indian cinema in 2012 and invited Bollywood celebrities, it is for the first time that an Indian celebrity has gotten honoured individually. This is also the first time that a celebrity is given a tribute in front of 30,000 people. Talking about this milestone,
Priyanka says,” It is such an honour to be recognized this year with a tribute on Jamâa El fna square before the Moroccan public, who have always shown so much love and support throughout my career."
Three films of Priyanka – Krrish 3, Bajirao Mastani, and The Sky Is Pink are part of the festival’s line-up. Krrish 3 and Bajirao Mastani have also received the honour of public screening  at the Jamaa El Fna square, which draws over 20,000 people every evening for a festival show.
Besides Priyanka Chopra Jonas, three more names have been  honoured for their contribution to cinema. The other names are, American director, producer, actor and environmentalist Robert Redford, veteran French filmmaker Bertrand Tavernier who has directed some of the most celebrated films of contemporary French cinema and one of Moroccan cinema's shining stars, actor Mouna Fettou, whose outstanding career has spanned nearly three decades.
By Santosh Sahu
Share to: