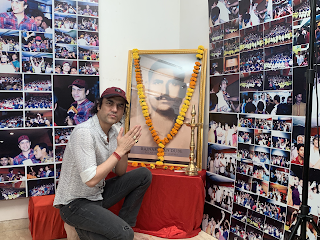 Megastar Aazaad who has written, directed and edited the film RASHTRAPUTRA and also the first ever Sanskrit language film AHAM BRAHMASMI celebrated the 109th Birthday of iconic and legendary founder Shri Rajnarayan Dube at his office in Oshiwara Andheri (Mumbai) on 10th October.
He said:" It is a historic day for all of us at The Bombay Talkies Studios. Rajnarayan jee had started the first ever popular and the biggest production house The Bombay Talkies Studios in 1934 and made as many as 115 films. He had also introduced legendary names like Himanshu Rai, Devika Rani, Ashok Kumar, Raj Kapoor, Dev Anand, Dilip Kumar, Mehmood, Shobhna Samarth, Kishore Kumar, Manna Dey, Lata Mangeshkar, Kamaal Amrohi, Hrishikesh Mukherji, Kishore Sahu etc. besides hundreds of others and made history in the Indian film world. After six decades, I got the chance to play the unforgettable role of the great freedom fighter Chandrashekhar Azad in the film RASHTRAPUTRA which is produced by Kamini Dube. This film also created history by going to the Cannes Film Festival and was shown to the world audiences on 21st  March.. Later, I directed the first ever Sanskrit language film AHAM BRAHMASMI which was received with thundering response by the audiences in Delhi and Benaras recently. Very shortly, I will be launching two more films and the pre-production work of both the film are going on. I am feeling very happy to say that we all at The Bombay Talkies Studios are fulfilling the dreams of the legendary founder Shri Rajnarayan Dube and will be making purposeful and meaningful films which will highlight the Indian parampara, its rich traditions and culture and make every member of the family happy whenever they will watch our films.
By Santosh Sahu
Share to: